Share All sharing options for: Closer By Committee Prevails

The words "Dan Wheeler is warming up for the 9th inning" strike fear in my heart.  Last night Cardiac Dan was able to keep my heart rate pretty steady.

Wheeler got a gift in striking out Matt Tolbert.  For some reason Tolbert thought it would be a good idea to swing at a ball that was helmet high.  If he doesn't swing there then the count is full and who knows what happens.  Wheeler walked the next batter he faced, Brian Buscher.  This brought Denard Span to the plate, who quickly flew out to left field after two pitches.  The cyborg-like Joe Mauer was now up and represented the tying run.  Flashes of the Rays blowing 10-0 and 5-0 leads this past week ran through my head.  I could see Mauer launching one of Wheeler's 86mph changeup's into the right centerfield seats.  But Maddon put an end to all of that by bringing in Randy Choate.  Maddon doesn't seem to have the trust in Wheeler he had last season, which is a good thing considering how bad Wheeler has been.  Choate did his job ast a LOOGY and struck out Mauer on four pitches, picking up his first major league save in the process.

Here's a graph of Choate's pitch speed, mostly because it looks like Mt. Everest. 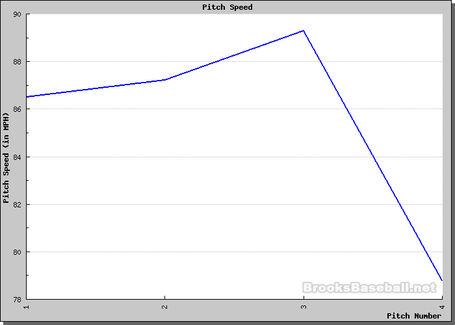 The bullpen was very good in closing out what Shields had started.  Only three relievers were used, and that's going to end up being important seeing as David Price is starting today.  I don't think he'll go five innings max, so the team needs some fresh bullpen arms.