The Dynamic Duo: Dan Wheeler and Troy Percival Come Through

Share All sharing options for: The Dynamic Duo: Dan Wheeler and Troy Percival Come Through

I've been hard on Wheeler and Percival this season, so I'll take some time to praise them when they do well.

Wheeler came into the game with a one run lead and J.D. Drew on first.  He proceeded to walk Jason Bay, putting the tying run in scoring position.  Next up was the hot hitting Mike Lowell.  Wheeler was very smart in this sequece and didn't give Lowell anything inside to drive.  The plan worked as Lowell flew out to right field, ending the inning.

Here's the strikezone plot to Lowell: 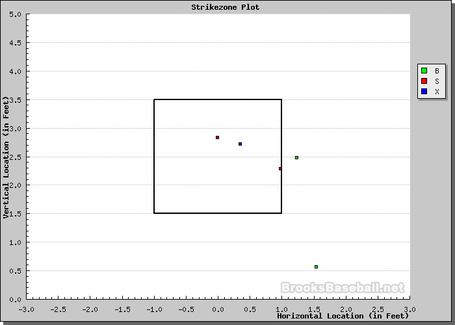 The 9th inning brought Troy Percival, this time without his usual bag of stomach-turning tricks.  Maybe it was because he was facing the weakest hitting part of the Red Sox order, but Percival seemed in total control the entire inning.  The only bit of theatrics came when Steve Bartman's cousin got in the way of Evan Longoria catching the final out.  No, the fan didn't reach into the field of play and interfere, but being a Rays fan, should have backed off and let Longoria end the game.  Ellsbury ended up hitting a ball to the wall in right field to end the game so the fan was spared.  However, if that ball had carried an extra four feet I think that fan would have been torn limb from limb, his appendages strewn all about at the hands of Troy Percival.

If this dynamic duo keeps pitching so well we're going to have to bestow a nickname upon them.  I have one ready to go...Hold and Save(h/t Tommy).