It's pretty funny how things work out. A year ago yesterday, Scott Kazmir made his season debut. Going four innings, allowing three walks, and striking five out in Fenway Park. Nobody cared about the results because, well, our ace was finally back. Not quite the same attitude towards Kazmir following this start. Let's go over a few aspects of his start.

Entering the game, Kazmir's first inning OBP against was .519. Barry Bonds 2001 OBP was .515. Kazmir is having runners reach base in the first inning of games at the same rate as Bonds during one of the best offensive seasons that the world will ever see. That's simply unforgivable. I'm not going to question his focus or concentration, but I will question whether he's warming up enough. I know you don't want Kazmir warming up too much, but when you're walking almost two per first inning, well, there's something wrong there. Jim Hickey and company have to fix this, have to.

After the first inning Kazmir has been fine, until we reach the third, fourth, and fifth innings, which he's against getting bombed at an unmerciful rate. The walk rate is about one too high and even then it's high especially when combined with a declined strikeout rate. People have always knocked on Kazmir for trying to strike too many guys out, as if that's a bad thing. Strikeouts are awesome. You don't want your pitchers letting every batter put a ball into play. Before you respond to that no, you really don't want pitchers making the defense work. Even if we were talking about a groundball heavy batter, he's still going to give up quite a bit of hits, potentially more than a flyball pitcher - although he'll be giving up less homeruns. Strikeouts are good, don't try and turn Kazmir into Chien-Ming Wang when you don't need to.

Kaz topped out just shy of 91 on his fastball and sat around 88-89. Prior to the game his fastball was moving about the same vertically as the previously high amped version, but was also dancing in to lefties a few inches more than usual. Is this intentional? I don't know. Perhaps that should terrify me, but I'm going to trust this front office over rampant speculation on why his velocity is down, and if they're letting him pitch, well then who am I to say anything different?

Okay, so he walks two in the first, allows a homerun, then goes 6.1 innings and strikes out seven while walking nobody and looking a lot more like decent Kazmir. Which means all of the struggles were basically in the first inning, going all the way back to the first point.  Just look at his strikezone plot in the first and non-first innings: 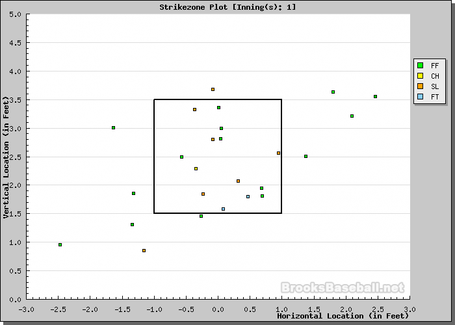 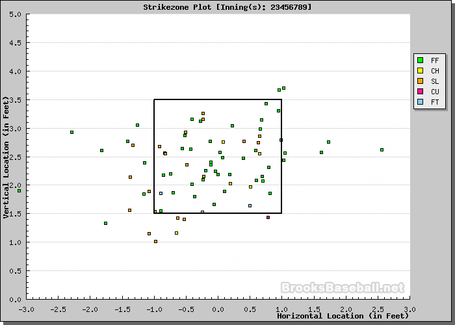 It almost looks like his fastball control is poor early on, doesn't it?