When in Doubt, Nudge the Attendance Issue

Share All sharing options for: When in Doubt, Nudge the Attendance Issue

It's a bit difficult to extract whether Kazmir means that he pitches better with a full house or if the team simply plays better. We all know about the win/loss record when the stands are packed, but does that same idea apply to Kazmir? Let's look at his 14 home starts from 2008, average attendance in these games was a little over 25,000. Is there a relationship between the number of seats sold and the Win Probability Added by Kazmir on that night? 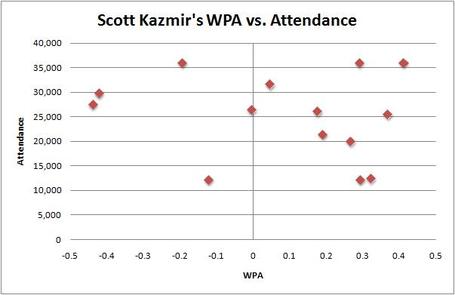 Doesn't seem to be much of a relationship there, but WPA is unfair to pitchers on hits and fielding mistakes, so let's look at some other measures, just to give Kazmir the benefit of the doubt.

Let's break the starts up into three tiers: highly attended (25k+), lowly attended (less than 25k), sellouts. That gives us six, five, and three. Imperfect, but there's not much we can do about it. Here's how those tiers average out

Now look, nobody is saying the players don't feel more pumped up in front of a full crowd. That's obvious. Doing things this way creates a sample bias because of course he's going to be better in front of nobody, that implies the opponent was weak. Just look at the opponents list for lowly attended starts: Rangers, Astros, Athletics, Yankees, Orioles. Now sellouts: Red Sox, Twins, White Sox.  So yeah, Kazmir doing better in lowly attended games makes perfect sense.

Most of Kazmir's starts over the years have been a delight to take in, but he's doing absolutely nobody any favors by harping on the attendance issue while correlating his poor outings with the poor outings in the seats. Plus, it doesn't help Kazmir that in the past, many conversations about which games to attend were stemmed upon his schedule.

Maybe after your contract expires you can go to Toronto, where the best record in the A.L. drew about 2,000 more than the Rays last night. The funny thing is, good teams win no matter how many people are there to see them.

[Note: Again, it's hard to tell whether Kazmir is saying this is an issue with "him" or with the team. If it's the latter, then I apologize for singling him out.]