As R.J. said earlier, "Matt Garza needs not of your large crowds."

It's really a shame that only 13,174 people were in attendance for what turned out to be one of the better pitching matchups of the young season. No, it wasn't a 1-0 pitchers duel, but for the better part of six innings, Matt Garza went toe to toe in a wonderful game of "catch with me if you can" with Baltimore's Koji Uehara.

I was lucky enough to be in attendance for the game and came away extremely impressed by both pitchers. R.J. already went in depth on Uehara's strike throwing ability. I'm still skeptical if he can sustain his success once a more in-depth scouting report gets out on him, but for now the guy is everything you want in a soft tossing right hander who lacks stuff. He makes up for what he lacks in stuff with smarts and control. I know Andy Sonnanstine doesn't have the repertoire, but I hope he was taking notes.

But back to Garza, who has impressed me for the better part of a year now, and is easily becoming the 1a to James Shields' 1.

Garza's perfect game lasted all of five pitches on this afternoon, but the results were just as good as they were last Thursday. On the day, he finished with 8 innings pitched allowing three runs on four hits including two home runs. He walked two and also struck out two. Garza pounded the strike zone and used just 99 pitches over those 8 innings. While he couldn't quite keep the 78% strike rate of his opponent, he finished the day with 63% strikes including six swinging strikes.

Once again, Garza worked mainly off of his four seam fastball which he threw at an average of 91 mph and 65% of the time. In typical Garza fashion, he was able to maintain a steady velocity through out the night and was throwing his hardest into the ninth inning. When he wasn't throwing a fastball, he went to his curveball 17% of the time and slider another 10%. He had just six miles of separation from fastball to slider, but a tremendous 16 mph difference between fastball to curve. 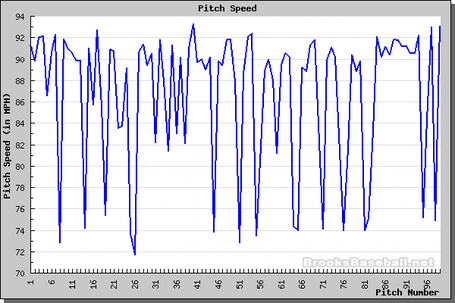 I did notice a slight difference in the release point between his fastball and his breaking balls. His breaking balls seem to be coming out slightly higher than his fastball. I don't know if it's a conscious effort or not, but whatever it is it seems to be working...almost to perfection.