If the Rays didn't get their fare share of controversial rain delays during the World Series, they sure did tonight.

With a 3-0 lead, two outs, the bases loaded and a monsoon hitting the field in the 8th inning of last night's game, the Rays got a first hand taste of the Yankees home field advantage.  The rain was so bad that J.P. Howell could barely grip the baseball, leaving him unable to throw a curve ball which left only a rain-diminished fastball.  But alas, the tarp was not pulled out at this point.  No, that would have made too much sense.  Instead of waiting out the rain and continuing the game when the elements were fair to both sides, the umpires decided to keep the game going and let Mark Teixeira bat.  As I mentioned above, Howell could barely grip the ball. Teixeira sent a broken bat double into left field, clearing the bases and tying the game.  Only then was the ground crew called and the tarp put on for a 28 minute rain delay.

I know I'm going to sound like a giant homer and conspiracy theorist, but I don't care.  If it had been the Rays up to bat in that same situation I don't think there's any way in hell the umpires DON'T call for the tarp before the game gets tied.  Regardless of the outcome of the game, I don't think the umpires made the right decision.

Ahhhh the advantages of playing your games indoors... 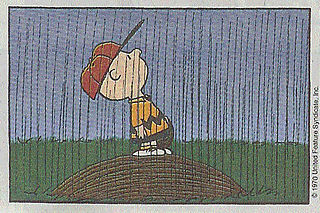 It wasn't pretty, but the Joe Nelson, Grant Balfour and Troy Percival got the key outs the Rays needed in the 9th and 10th innings.  With men on first and second and one out in the bottom of the 9th, Joe Nelson got Ramiro Pena to ground to Evan Longoria for the second out as the runners advanced.  This brought in Grant Balfour who looked like the Grant Balfour of last year, pumping fastballs in for strikes.  Granted, he was facing Jose Molina, but it was still good seeing him throwing gas in a tight situation.  Molina quickly fell behind 0-2 before flying out to right field.

After the Rays took the lead on a Carlos Pena home run in the top of the 10th inning it was up to Troy Percival to shut the door.  As is usually the case with Percival, he didn't make it easy on anyone.  After getting Jeter to ground out, Percival allowed a ground rule double to Johnny Damon.  This brought to the plate the Yankee hero from the 8th inning, and now winning run, Mark Teixeira.  Just to make things even more interesting/horrifying, Percival threw a wild pitch that allowed Damon to advance to third.  Somehow, Percival was able to get Teixeira to fly out to shallow right field, holding Damon at third.  The rain had started falling very hard again, nearly creating an identical scenario to the 8th inning.  This time instead of finding the grass, the ball found a nice warm home in the glove of Carl Crawford.  Crisis averted, game saved.

It wasn't the easiest game to watch, and frankly I didn't care how aesthetically pleasing the ending was, but a win at Yankee Stadium is always a good feeling.