Share All sharing options for: Choose Your Own Adventure: David Price Version

Let's say some divine presence offered you two paths for David Price's career to take. One is Mark Prior, a walking medicine cabinet; and the other is Jose Contreras. This means, over the next six years, Price will either throw 660 innings or 980 innings and accumulate 15.8 WAR. The risk with the former is evident, you can't count on him for extended periods of time, but yet he's really, really good. The latter gives you dependability for the most part, but he's not exactly an ace. On a graph, the two look like this: 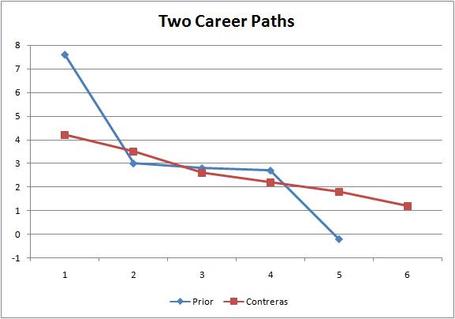 Contreras has longevity and consistency, Prior? Not so much.

So, which do you choose and why?

There really isn't a reason for choosing these two examples. I could've used Ben Sheets and Derek Lowe. Or John Smoltz and Carlos Zambrano. Or even Kelvim Escobar and Aaron Harang. The common theme is still present.