A Quick Look at Wade Davis

Share All sharing options for: A Quick Look at Wade Davis

A popular topic throughout the rest of the season is going to be Wade Davis' arrival. It's almost certain to happen at some point this year. If that debut comes in September and in the form of a relief role like David Price or a spot starts here or there like Jeff Niemann, well, who knows? FanGraphs recently added minor league gamelogs, and I took advantage of them by creating this graph: 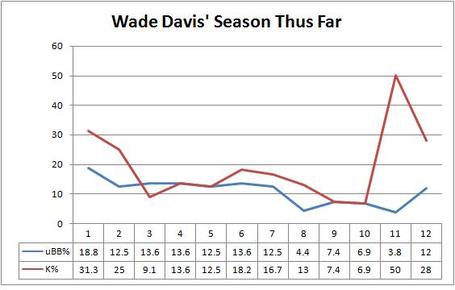 Davis seasonal strikeout rate is 18.8% and his walk rate is 10.5%. Last year, Davis spent a bit less time in Durham, but struck out a quarter of the batters he faced and walked 10.9%. That doesn't scream improvement. Over the last few starts, his walks have went down but unfortunately in two of those starts so did his strikeouts. The positive is that his last two starts have been really, really good.

The other positive news is that Davis' swinging strikeout rates are almost identical. Called strikes are down, but if you give me the choice of one or the other, I'm going with the way it is. Davis' stuff is still fooling hitters or simply overpowering them. Either way, it works.  Davis is throwing basically the same amount of balls, meaning his control is just about the same.

It's been said before, and I'll echo it; Davis isn't ready right now. That could change soon, but rushing him for marginal gain in the bullpen right now over what, say...Winston Abreu could bring just isn't worth it whether he's working on something or not.