David Price Continues Walk On Wild Side In Rays Victory

Share All sharing options for: David Price Continues Walk On Wild Side In Rays Victory

Nobody said it was going to be easy or pretty and that has definitely been the way David Price's first month as a Rays starter has been. Flashing brilliance with bouts of wildness, Price continues to struggle with pitch efficiency. In a performance that can be described as Kazmirian, David Price held down the Angels offense allowing just one run on two hits over 4.1 innings, however six free passes lead to an elevated (105 pitches) pitch count and ended his night early.

Price has gone over 100 each of his four starts; however he has failed to complete six innings in any start and has failed to finish five innings twice including his first start where he couldn't get out of the fourth. Once again long at-bats and the inability to finish hitters off did Price in. During the game, Erik bestowed the nickname "Full Count" on Price and it seems to fit. Of the 20 batters faced, he went to a full count eight times. He had nine at-bats go six or more pitches. Obviously we are working through some of the growing pains we talked about when Price was in Durham and pitch selection also remains at the forefront of the discussion.

There must have been a technical glitch with Pitch F/X last night because only 97 pitches registered with brooksbaseball. Of those 97 pitches, 82 of them were fastballs and the other 15 were sliders. Looking at the movement of the pitches there looks to be no signs of the spike curveball or the changeup. On the season Price has thrown his fastball 71.6% of the time and the slider 26.1%. The other 2.3% is made up of random curveballs or changeups. I'll say it again; if Price is going to make that leap he's going to need to at least produce a "show me" or "get me over" change up.

It also seems that Price's lack of feel for the strike zone is getting around. First, the hitters are just sitting on pitches. There were times last night that I felt the Angels hitters went up to bat with no intentions of swinging and Price's wildness didn't really give them a reason too. He was only able to induce eight swinging strikes last night when he should be getting a lot more with his stuff.

Second, while pitchers with good control and command tend to get borderline calls, it is the opposite for pitchers who have less than stellar control. Instead of getting the benefit of the doubt calls for strikes they tend to be called outside the zone and as you can see below there are nearly 10 borderline calls that went against Price. If even half of those are called strikes I may have a different view of his start 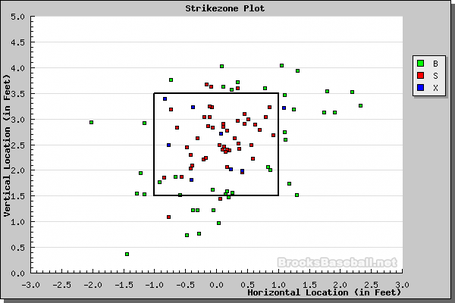 I don't want to be all negative as we all know we're going to have to take the bad with the good. Price is still striking out hitters in bunches. He added six more yesterday in just 4.1 innings and now has 26 K's in just 19 innings (12.32 K/9). If he would limit the free pass, then he would drastically reduce the number of base runners he sees because he's only allowed 13 hits in those 19 innings.

I am still convinced that one day a left- handed starter for the Rays will go eight innings and dominate a team without wasting pitches. Hopefully that day is soon.