Recently there has been much discussion about pitchers improvements or lack there of under Jim Hickey. No matter how hard we try we will never be able to quantify the impact of a pitching coach on a pitcher. While Edwin Jackson and Jason Hammel continue to have success in a small sample sizes with their new teams, Matt Garza continues to improve and show maturity for the Rays. Whether this is a product of Hickey's teaching or not, Garza is a much better pitcher then he was last year and even in an off night like last night he still showed progress.

If you heard the post game interview with Gabe Kapler you probably noticed he repeated the "process/results" mantra. Last night Garza's results were not stellar, but the process, especially after the first few innings improved. Matt's night started off pretty bad. Four of the first five hitters hit line drives to holes in the defense and Garza struggled with command of his fastball. He threw 34 pitches in the first inning with 22 of them being fastballs. One thing we know is Garza is going to live and die by the fastball; there is no getting around it. It is his best pitch and he's going to throw it 60-70% of the time. Last night was no different as 63% of his pitches were heaters. However, the maturity of Garza showed as he used us breaking ball pitches in different sequences keeping the hitters off balance. 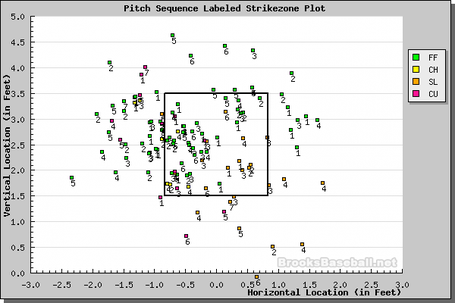 As you can see Garza was not afraid to throw first pitch breaking balls, second pitch breaking balls and really kept people guessing after that first inning. Because of this Garza was able to get eight swinging strikes and fool quite a few hitters including Eljiah Dukes, who went down swinging in his second at-bat after lacing a double in his first.

Don't get me wrong 116 pitches, seven hits, three runs and four walks in 5.2 innings isn't something to get excited over, but some nights pitchers don't have their "A" game. Admittedly, Garza did not have his last night. However, unlike last year where he would've self destructed after a three run 34-pitch first inning, Garza battled himself and used his inner crane to "gut" out the rest of the game. It wasn't quietly Shiedsian because Shields would've somehow gone eight innings, but it was a step in the right direction for Garza.

I'd also like to give a hat tip to the Rays bullpen, which was once again called up to pick up their starter and hold down the other team. Joe Nelson, Dan Wheeler and J.P. Howell combined to hold Washington scoreless over the final 3.1 innings of the game and allowed just two base runners after Garza's exit. I still don't understand the removal of Nelson for Wheeler, but whatever it worked. The bullpen has now put together 17 straight scoreless innings. We are always quick to point out the flaws, but it's time to give a little hand to the pen which has really been the team's strong point this week.