Yesterday, I ended my recap article with the following line:

With James Shields on the mound tomorrow anything less than a sweep of the 16 win Nationals is unacceptable.

To my delight the Rays delivered, but it didn't have much to do with James Shields being on the mound. Don't get me wrong Shields was alright, but it wasn't a typical "good" James Shields start. After working a relatively easy first inning, Shields would give up a run on three hits in the second. He was bailed out by Gabe Gross, who gunned Alberto Gonzalez down trying to go from first to third. After a perfect third inning, Shields would again struggle in the fourth inning. Four of the first five batters would get a hit off Shields, and the score quickly went from 1-0 to 4-0. Once again, Jim Hickey was late to leave his perch in the dugout to settle down Shields, who was clearly showing signs of frustration.

If I see it and you see it, then I would hope the pitching coach would see it. I know Shields is the staff ace, and at age 27 he has earned a longer leash than anybody else on the staff, but nobody is asking for him to be yanked. Just a quick 30-second pep talk seems to do the trick. Once Hickey came out, Shields retired the final two batters with ease. Shields would have easy and innings in the fifth and the sixth before being removed after 6.1 innings with the game tied. Again, it wasn't a great performance, but good enough against the Nationals.

For the second straight start Shields was "hittable." Over his last 12.2 innings, he has allowed 19 hits. Much like Andy Sonnanstine, Shields's problem hasn't been control, but command. In both starts he has thrown at least 70% strikes, but it's where those strikes have been. Look at today's strike zone and you see most of those pitches are up in the zone. 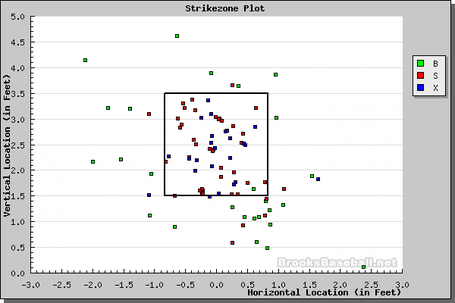 Shields hasn't developed David Price's fastball, which means he doesn't want to live up there. The good news is while his command wasn't great, it seems his stuff was. Shields was able to get 12 swinging strikes out of his 92 pitches. He has done a good job of getting swings and misses all season and today's 13% swstr% will only increase his 10.4% on the season.Usage wise Shields threw more changeups today (30%) than he usually does (24%). He continues to throw his fastball 35-40% of the time while mixing in sliders and curveballs. Early on in the season he was throwing a lot of cutters, but he has drastically reduced the number thrown in recent starts.

Shields was got some support his offense, which barely gave him more than the 3.9 runs they were averaging in his starts, and a lift from his bullpen, which continues to show drastic improvement. Shields gave way to Randy Choate, who is turning into the most reliable Rays' reliever not named J.P. Howell. After a passed ball by Dioner Navarro wiped out a potential double play, Choate got the double play ball anyway and was able to get the second out on a fielders choice. After intentionally walking Ryan Zimmerman, Choate was asked to get out the Nationals home run leader Adam Dunn with runners on the corners and two outs. Dunn worked a 2-2 count and took a very close fastball that was slightly outside for ball three. Choate then delivered a perfect fastball that painted the outside corner for strike three. 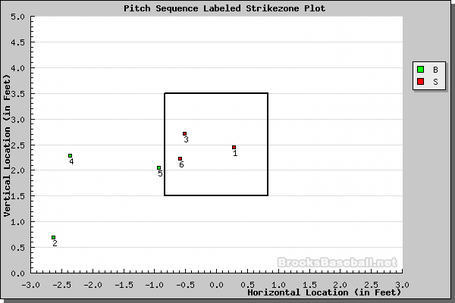 Choate once again got the tough lefty in the opposition's lineup out and the Nationals would not threaten again. Dan Wheeler worked a perfect eight inning against the 5-6-7 part of the Nationals lineup that went a combined 4-12 with three RBI today. It seems we have gotten our wish and J.P. Howell has become the Rays de-facto closer. Even though he hit a batter, J.P. struck out the side getting a few swinging strikes in the process. With proven "closers" Troy Percival and Jason Isringhausen out indefinitely, hopefully Maddon will continue to call on the Iceman in the ninth inning. J.P. in...game chilled.

Heading into the off day it's nice to be riding a five game winning streak and moving up to third in the AL East. The climb is far from being over, but the Rays are starting to look more and more like the defending league champions. The Rays should get a boost in the lineup and up the middle defensively as MVB Jason Bartlett is expected to join the team for the "urban cowboy" road trip. The Rays play three against red hot Colorado before heading to New York for three against the Mets. I'm going to get greedy and ask for four wins on this trip, but the team can feel free to win them all.