Change Up: James Shields Is Returning To Ace Form

Share All sharing options for: Change Up: James Shields Is Returning To Ace Form

I am a James Shields guy. During our many Shields vs. Scott Kazmir arguments on the site, I tend to be one of the more vocal Shields defenders. What can I say? I like a guy who's going to give me seven innings of efficient and effective pitching. In my last post on Shields, I was a bit critical, but even Shields himself would agree he wasn't that good on Sunday. However, over the past month he has started to regain his ace status.

Shields struggled over the first seven starts of the season. He went 3-3 with a 4.02 ERA and had BB/9 of 2.68, the highest since his rookie season. He also had a career worst HR/9 of 1.53 after allowing eight home runs in just 47 innings. While his home runs and his walks were at or near all time highs, his strikeouts were at an all time low. Shields is not a strikeout pitcher, but has gotten his fair share of punchouts. However, he was averaging just 5.7 K's per nine over those seven starts. One more thing I wanted to point out is five of the seven starts came on the road where Shields' has well documented struggles.

Over the last seven starts, Shields has looked much more like himself and that should come as no surprise. Six of the seven starts have come at the Trop, and in the lone road start he gave up four earned runs to the Florida Marlins on a career high 12 hits allowed. The strange part about this whole thing is Shields is getting hit a lot during the last seven starts, but he has been a better pitcher. This is why we talk about and love FIP so much.

Over the first seven starts, he gave up just 45 hits. In the last seven he has given up 58. Hittable? Yes, but also better. Shields has cut his walk total in half during this stretch. He has given up just seven free passes over the last 47.2 innings which is good for a BB/9 of 1.33, slightly better than his career average. Even though he's allowing more hits, less of them are leaving the ball park. He has surrendered just two home runs in those 47.2 innings and has his overall HR/9 at a career low 0.95. Completing the trifecta is an increase in strikeouts.

Like I said above, Shields is not a strikeout pitcher, but over the last seven games he is averaging seven K's per nine. He has increased his swinging strike percentage from 9% in the first seven starts to 12% over the last seven. Overall his numbers are now 5-5 with a 3.52/3.73 ERA/FIP, both would be career bests. His overall K/9 is still lower than normal and his BB/9 is a tad high for him, but his K/BB of 3.19 is still above average. As for the concern about hits, Shields has given up 6% more line drives than he did in 2007 and 2008. Also, his BABIP of .320 is 28 points higher than it was in each of the past two seasons; I smell regression.

Besides the home/road issue, Shields has had a change in pitch selection. In the beginning of the season he was throwing more cutters and not as many sliders. However, recently there has been a shift towards more sliders and less cutters. Here is the difference in table and graph form... 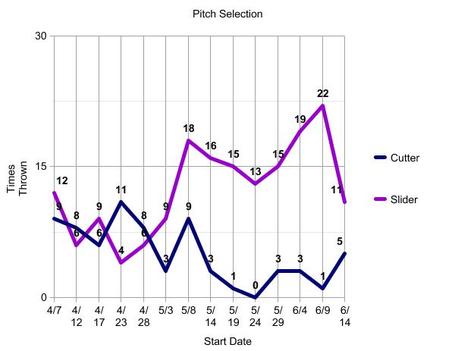 Less cutters and more sliders has led to more swings and misses and better results. I can't explain the home/road issue, but It will be interesting to see if Shields will continue this line of pitch selection meaning more breaking balls, which may mean more hits, but better control and command. Scouting reports get around quickly, and the best pitchers tend to adapt as the teams their facing do the same. If we've learned anything about Shields, it is he will do just that. Shields was not dealt the best hand in terms of pure stuff, but he always has an ace in his pocket.