Good processes should produce good results. It's been said on this site a million times, and we've heard several Rays throughout the season repeat the mantra. Last night we saw good processes from David Price, however the results were not there. With that being said if Price repeats last night's processes over and over again those results will certainly follow.

We've talked about the similarities between Price and Scott Kazmir, but last night Price did something Kaz hasn't done in nearly a year; he pitched seven full innings in a major league baseball game. What is more impressive is he did it in just 99 pitches with 71 of them going for strikes. In his previous four starts he averaged 105 pitches in just 4.75 innings per start.

Now let's be real, 10 hits and five runs isn't good, but we can't expect Price to give up two hits and one run in every start. He did strikeout five batters and get this...ZERO WALKS. The effect that Coors Field has on breaking balls has been well documented. Both of the home runs he allowed were on sliders. Early on it was clear that Price did not a feel for his slider and he relied heavily on his fastball. He threw 37 pitches in the first two innings with 30 of them being fastballs. Unfortunately for Price, by the time he got the slider going, the damage was already done. After the second inning the Rays were down 4-0.

Over the next five innings Price would give up one earned run on four hits while striking out four. He used just 62 pitches over the final five innings with 26 of them sliders and wait for it....nine changeups. We've been waiting to see the third offering from Price and finally last night he decided to mix it in. The change up stayed around 84 mph which was around eight miles slower than his fastball. A true testament of how strong David Price's arm is; he threw a change up around 90 mph. He also threw eight of the nine change ups for strikes, which shows that he had good control of the pitch. 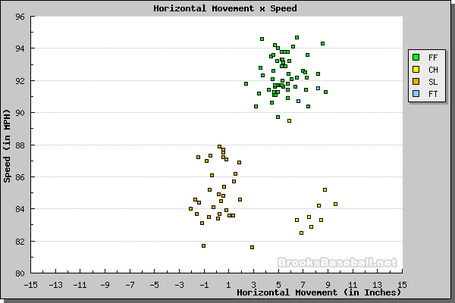 All in all, the result was not there, but the processes were much better. Price mixed his pitches well after the second inning and used his third pitch effectively. He did not walk a batter and was very efficient with his pitches by throwing strikes. Pat Burrell said it best after the game; the Rays are going to lose games, but they need to win series. With Ace 1b, Matt Garza on the mound today the Rays have good chance. However, the Rockies will counter with Matt Garza clone Ubaldo Jimenez. It should be a dandy.