Share All sharing options for: Matt Garza Loses Match Up With Jimenez, Series Finale Against Rockies

In a match up of two very similar starters, one was clearly comfortable in his environment, while the other looked out of his element. Unfortunately for us, Ubaldo Jimenez lived up to his stellar track record at home, Coors Field, and Matt Garza struggled with control of his fastball. Much like David Price last night, Garza relied too heavily on his fastball early on and barely went to his secondary stuff. Also like Price, he settled down, but it was already too late, and the Rays once again trailed 4-0.

Garza's problem was fastball control. Despite throwing a higher strike percentage than Ubaldo, Garza was missing in the wrong spots. His counter part was missing low, while Garza was missing up. He only gave up five hits; however, three of them were home runs. 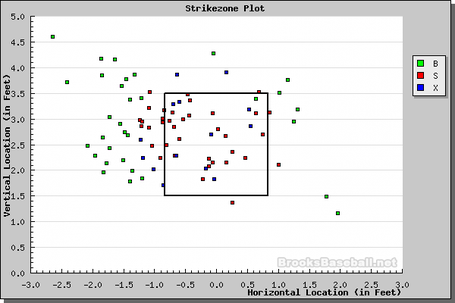 Ben Zobrist, who now qualifies for leaderboards, would snap a personal 0-8 streak with a two run single in the ninth, but the Rays would come up one run short once again. None of the Rays starters had especially great games in Coors and I'm sure none of them will miss playing there. I called for a 4-2 road trip, but at this point if they take two out of three in New York, I won't complain.