Wade Davis May Have Figured Triple-A Out

Share All sharing options for: Wade Davis May Have Figured Triple-A Out

A few weeks ago I presented a graph similar to the one below and stated that Wade Davis wasn't ready for a major league call-up based on it. I'm still not sure he's ready, but his last four starts have been amongst the best experienced by Davis at Durham. The separation between strikeouts and walks, in this case unintentional - meaning intentional walks are deducted from the total, is trending in the right direction. The only question is whether this is a small sample size playing a trick on lusting brains, or whether Davis is actually adjusting and improving. 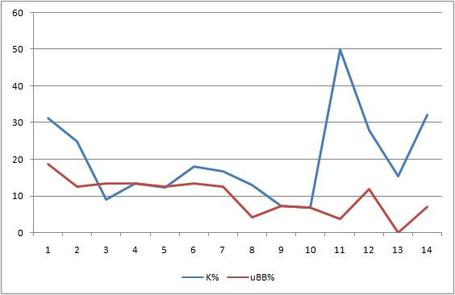 Maybe Xavier Hernandez fixed something with him, maybe Davis is no longer throwing mostly second and third pitch offerings, maybe the opponents drawn lately have weak offenses. There's a ton of things that would explain why Davis is suddenly enflaming, Writing as a fan, you look for things that confirm this is the real Wade Davis. Writing as an analyst, you better be conservative in your degree of confidence that Davis has figured it out.

Hopefully he appeases both moving forward.

Instead of being lazy, I decided I'd look up the R/G for each of the teams he's faced.