Tonight's game started out very similar to the previous three Rays loses. After an uneventful first inning, James Shields ran into a bit of trouble in the second. However, there's a reason James Shields is the ace of this staff. On most nights, Shields gets into trouble, but usually limits the damage and dominates from that point on; tonight was one of those nights.

After allowing his lone earned run on three hits in the first 2.1 innings, Shields went into lock down mode and retired the final 14 Mets batters he faced. Shields's night was ended prematurely after seven innings and 87 pitches due to an hour and 13 minute rain delay. In the seventh inning, Shields retired the side on just eight pitches showing he was clearly in the zone.

The Fox analysis was awful today. First, Tim McCarver said one of the reasons the Rays are struggling is because their defense struggled to "catch the ball" over the first third of the season. We know that this is definitely not true. It hasn't been perfect, but the defense is not something we've had problems with. The second instance was the anti-sabermetric rant about closers in the ninth inning just as unconventional closer, the Iceman, J.P. Howell locked down his fourth save. /rant

Fox did hit on one point of analysis. One of their keys to the game for James Shields was mixing speeds. Shields mixed in all five of his pitches today with a variety of speeds. He threw his fastball 45% of the time averaging 91.4 miles and maxing out at 93.4. Once more, his change up was his second pitch at 20%. He split his curveball and slider almost evenly. The trend of throwing more sliders than cutters continued as did the good results.

Shields had much better command today. He threw 66% of his pitches for strikes and when he missed it was low in the zone. Take a look... 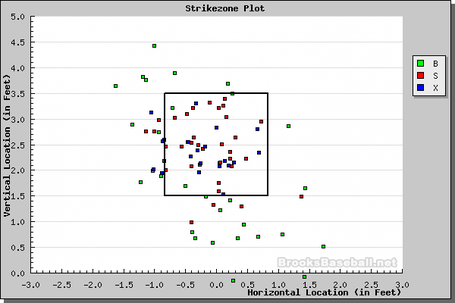 Notice that most of the green dots appear around ankles which is where you want to be missing. He didn't strikeout many (4), but he also didn't walk a batter. He pounded the lower portion of the zone and was able to enduce 10 ground ball outs.

The Rays offense has not supported Shields this season, and today was no different. I know the opponent was Johan Santana, but the Rays are lucky to get away with a victory after scoring exactly three runs for the fourth consecutive game. Hat tips to Carlos Pena and Ben Zobrist for hitting no doubt shots in the very pitcher friendly Citi Field. Also a hat tip for Dan Wheeler and J.P. Howell, who are becoming a very nice 1-2 combo at the back end of games at a combined cost of less than $4 million. It's up to the big Nyquil, Jeff Niemann to end this road trip with a series win and a .500 record.