After sputtering along for the past four games, the best offense in the American League got back to what they do best and that is hitting. The Rays scored exactly three runs in each of the past four games before exploding for 10 runs on 17 hits on this father's day afternoon against the New York Mets. Lead by stud B.J. Upton, who had four hits and finished just one hit away from the cycle for the second time this week, the Rays belted out double digit runs and 17 hits for the second time on this National League road trip. Their season high is 18.

Upton was the star and R.J. will cover him later, so I'll take a look at some of the other contributors in the Rays lineup. Like the previous four games, the Rays would trail by multiple runs early on. However, instead of coming up just short or providing just enough to get by like yesterday, the Rays bats broke out. Jason Bartlett got the party started in the fifth inning with an infield single. Bartlett had two hits on the day running his hit streak to 16 games. He is only three games away of breaking the Rays hit streak record of 18 games. B.J. Upton would put the Rays on the board with a two run double.

The slumping Carl Crawford would single home two more runs before being thrown out trying to steal third base. After starting the season 30 for 30 in steals, Crawford has been thrown out in five of his last 12 attempts. CC finished the day with three hits tying the same about of hits he's had over his last six games (22 at-bats). In the past two weeks, CC has gone back to his hacking ways. He's walked just once in his past 53 plate appearances. Today, he had three at-bats of four or more pitches. Hopefully, this gets him back on track.

After putting four runs on five consecutive hits in the fifth inning, the Rays would get going in the seventh inning thanks to a lead off single by professional singles hitter Pat Burrell. Upton would crush a home run in the next at bat followed by another single for Crawford. Up next was Evan Longoria, who came into the game hitting .178/.339/.400 with 15 K's. Longoria hit a double up the third base line scoring Crawford. Longo had great day at the plate going 4-5 with two doubles.

For some reason Jerry Manuel decided to leave lefty Ken Takahashi in to face Gabe "I eat left handed pitching for breakfast" Kapler. Kapler crushed a double to deep left field plating another Rays run. He would drive in another run later in the game off lefty Pedro Feliciano. While Longoria has been cold in June, Kapler has heated up with the weather. Before today's game he brought a June slash line of .421/.476/1.211 in eight games. The Rays signed Kapler mostly for his ability to hit left handed pitching. Well Kapler is doing that with authority. Here are his ISO splits for the season 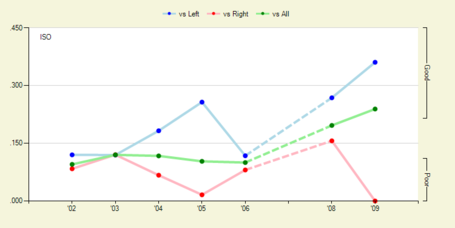 After losing three straight, these last two games were just what the Rays needed headed into the off day and a nice homestand. After dropping the first game of the series to the Mets, the Rays should feel pretty good about themselves taking the final two games against the Mets best two starters in their own ball park. I would love nothing more than a sweep against the struggling Phillies, who have dropped six straight headed into this weeks World Series rematch.