Share All sharing options for: David Price Pitch His Way Out Of Rays' Rotation? Scott Kazmir Set To Return

Like his start in Colorado, Price showed improved control, however, his command left a lot to be desired...a lot. The Rays defense didn't help much committing three errors in the first four innings, but Price didn't help out much either. He allowed 10 runs, five earned, on seven hits and two walks. He struck out just two in four and a one-third inning. Price threw 88 pitches with nearly 70% of them being strikes. This is a big improvement from his first four starts, but once again it's nice to have control; it's another to have command.

Sure, Price threw a lot of strikes, but many of them came up right at or slightly above the "belt." Once again, Price was basically a two pitch pitcher. 86 of his 88 pitches were fastballs or sliders. He threw just two change ups, neither for a strike. If you've been a reader of DRB for a while, you know we've beat this topic to death. Price does not need a plus change up, but he needs something to show as a third offering especially when he's throwing belt high sliders. 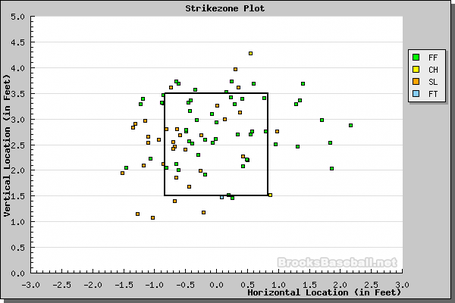 Another thing Price struggled with was putting away hitters once he got ahead in the count. Let's take a look at some specific at-bats in the first inning. With two on and no out, Price quickly jumped ahead of Chase Utley 0-2. Price could basically throw any pitch here. He hung a slider belt high which Utley cracked for a two run double.

With Utley on second, Price worked ahead 0-2 on Ryan Howard. Again, Price could throw anything here. This is where a nice 84 mph change up that looks like a fastball could really help. After fouling off two fastballs, Howard lined a double on another belt high slider scoring Utley.

After a quick visit by Jim Hickey, Price got ahead of Jayson Werth 1-2. Werth fouled off two fastballs like Howard. The next pitch was a slider; belt high except in on the right handed Werth. Nonetheless, Werth hit a single setting up runners on first and third and again no outs. Thankfully, Price would remember he is David Price and strike Pedro Feliz out inducing three swinging strikes on fastballs. John Mayberry Jr., the next batter, would crush a home run into left field on an inside fastball making the score 6-0 and effectively ending the game after one-third of an inning.

To DP's credit he rebounded nicely in the second and third innings, throwing a combined 17 pitches in the two innings. However, two errors in the fourth inning would lead to a three run shot by Chase Utley and a 10-0 Phillies lead.

Over the past few days most of the replacement talk has centered around Andy Sonnanstine. However, after tonight you have to wonder if the Rays are willing to let Price take his lumps in the majors or send him back to Durham to refine his game. The good news is Price really has seem to have found some control, but his command is lacking. As we've seen with pitchers in the past, command is not something you want to work on at this level. Listen, Price is extremely close to being a really good if not great starter, but obviously he's not a finished product. We've seen improvements, but nights like tonight are going to happen in his learning process. The next few weeks will go a long way in determining if the Rays are contenders or pretenders and Sonnanstine has proven in the past he can contribute as a starter to a contending team.

It might be time for the Rays to take a temporary Price check.