The 7-1 final score of the Rays-Phillies game doesn't look like a typical pitchers duel. However, for nearly eight full innings Matt Garza and Joe Blanton went pitch for pitch and nearly strikeout for strikeout in a close game. Then late inning hustle made his first appearance and the Rays exploded on the Phillies bullpen for five runs in the eight inning. I wonder if Kevin Kennedy thinks Ben Zobrist struck out in his first two at-bats on purpose in order to save his legs for the hustle play of the century in the eight inning. Blanton would throw 121 pitches in seven innings (he pitched to one batter in the eight). He allowed two runs on six hits, two walks while striking out 10 Rays including striking out the side twice. Blanton kept the Rays hitters off balance by mixing up his fastball, change up and slider. He was good; Matt Garza was better.

Coming off three lackluster starts, Matt Garza delivered one of his best games of 2009.He would allow just one run on three hits and three walks. All three walks came in one inning. In the top of the 4th, Garza walked the first three batters before pulling of the Houdini and inducing a wonderfully turned double play. He then struck out Matt Stairs swinging escaping the jam with no damage. Garza would get his fair share of strikeouts as well. In eight full innings, he struck out seven while throwing 117 pitches. He induced 11 swinging strikes.

Once more, Garza relied heavily on his plus four seam fastball. Coming into last night he averaged around 69% fastballs per game, however, last night the fastball was so good he threw it 75% of the time. He also showed a good slider, and when needed, he went to his curveball and change up to keep hitters off balance. Note to David Price: You don't need to throw 50% change ups, but you need to let hitters know it's there.

One of the things I enjoy the most about Garza's starts is checking the velocity chart after the game. Not only does he usually maintain velocity throughout his starts, but he usually saves some of his best stuff for late in the game. Just look at the chart below and you can see Garza was pumping 95 after pitch 111. Pitch counts? We're talking about pitch counts? 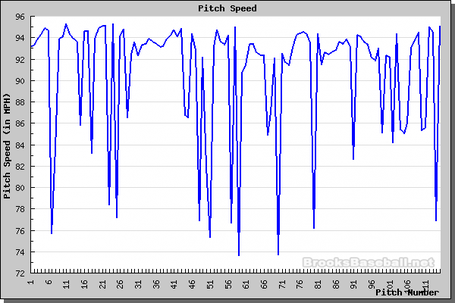 The Rays have a chance to take the series tonight in what could be Andy Sonnanstine's last start in the rotation. Sonnanstine is open to a move to the bullpen, and honestly I think that might be the best for all parties involved. As we've seen with J.P. Howell, a pitcher's strikeouts tend to go up while his walks tend to go down as a reliever. If Sonny becomes a right handed J.P. Howell, we will have to work on a cool nickname for him.