A (Not So) Wild Scott Kazmir Appears!

Share All sharing options for: A (Not So) Wild Scott Kazmir Appears!

Entering the game, most people wanted to see the following things from Scott Kazmir:

Let's see what he provided.

Uncharacteristically, Kazmir's average fastball sat a touch below 90 MPH entering this game. On some nights, hitting 93 was an accomplishment and rarity. Tonight, Kazmir sat mostly 91-92 and geared one up to 93 miles per hour. 45 of his pitches were fastballs, so the sample size is decent. An average of 91.2 MPH is still a bit below last year, but not by much. Kazmir's slider and change were also thrown faster, albeit marginally. 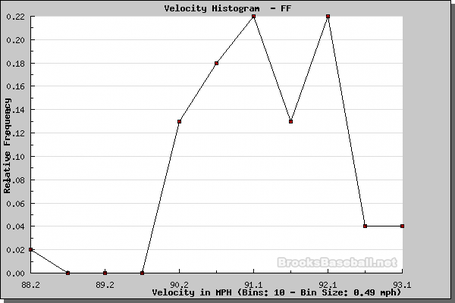 Getting ahead in the count represented a challenge, but Kazmir did maintain 60%+ strike ratios on each of his three main pitches. The pitch Kazmir didn't have command of was his two-seamer, or at least what Gameday classifies as his two-seamer. Less than 45% of those went for strikes, and he threw 16 of them.

11(!) tonight on 92 pitches with most coming on sliders.  12% empty swings is phenomenal. The Marlins are a middle of the road team in plate discipline, but are near the worst in the league at striking out. That makes it hard to tell whether this was more on Kazmir or a lineup that uses thinner bats. As for his quality of stuff, I must say, the change-up is impressive. Below, you'll see a pair of flight paths, compare the fastball and change-up paths, then note that Kazmir's change-up sat ~12 MPH slower. It looks like a fastball, until the bottom falls out. Beautiful. 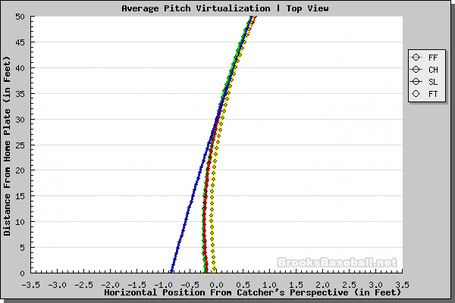 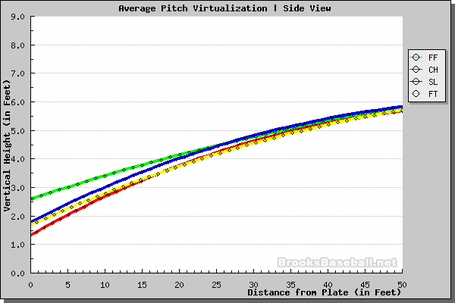 A lot of people don't realize that sliders are actually more straight than fastballs. This is the case with Kazmir as well. Look at the late separation point. The pitches are one and the same until the halfway point, at which the hitter has about two-tenths of a second to decide which pitch it is and whether to swing or not.  Major league hitters are good, but not quite that good.

All told, each of Kazmir's pitch types showed more movement than in his first few starts.  Add in the velocity gains and I'm content with the processes flashed tonight.

That works out to a tRA of 4.21. If Kazmir could replicate that performance every single time out, he would be the rotation's leader in tRA.