David Price is an enigma. Today he flashed two styles that contrast themselves nicely. Through the first four innings, Price walked four and struck out only two. Of the 73 pitches thrown, only three resulted in whiffs. A total of two non-fastball/slider pitches were thrown, and while the scoreboard looked pretty, it hardly told the entire story.

Then Price threw the fifth and sixth and oh my goodness. Three strikeouts and a walk over the next seven outs recorded. Price would generate four additional swinging strikes and looked a lot better while pitching efficiently. All told Price threw 96 pitches, making his ~7% swinging strike rate rather unimpressive. His tRA for the game sits at 5.16. I wouldn't worry about that too much since the walks are the only blemish on his record today.

The results were nice, if not sustainable. Not many pitchers are going to walk nearly a batter an inning as a starter and only allow a single run. The encouraging thing is the last three innings. Let's look at those 23 pitches in a few different lights. 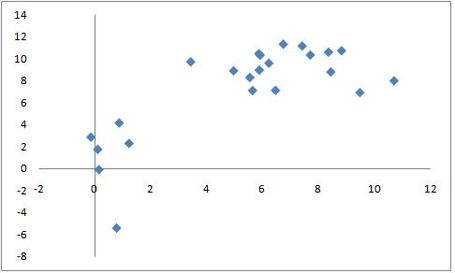 You can easily spot some pitch clusters. The grouping around the origin represents the sliders thrown. Slightly below you see Price's curveball, one of the two he threw today. The rest of the pitches are fastballs and ... gasp ... change-ups.  You can spot how many Price threw on this next graph: 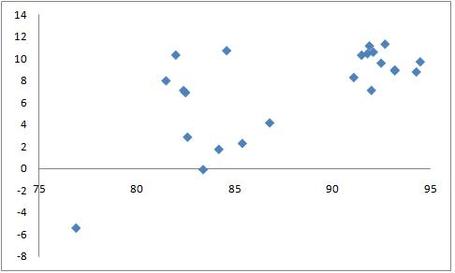 The x-axis is the velocity of the pitch, and the y-axis is the amount of vertical movement. That means the single dot below the x-axis is Price's curve. The pitches around the 82-87 mark and below ~5 are Price's sliders. The pitches in the top right are his fastballs, and those five pitches around 80-85, ~6+, those, those my friends, are his change-ups. He threw a ton over those last 23 pitches and saw success with them. The results of those change-ups: 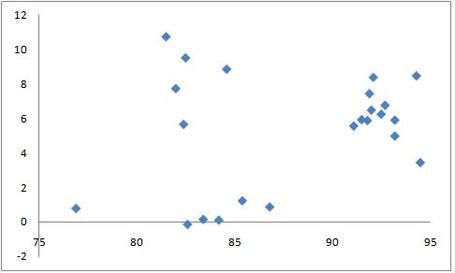 Now let's compare the horizontal movement of the pitches to their velocity.  Again, the curveball is the furthest point to the left, the fastballs are on the far right, the sliders are low and in the middle, and those beautiful change-ups are up and to the left/middle. The changes share some of the common ground with fastballs, but are well spaced themselves. They do show consistently enough movement, both vertically and horizontally, to cause batters to think fastball until they realize the pitch is going a lot slower than previously hoped.  How much slower?

Price's fastball sat about 10 MPH higher, so there's a nice separation there.  I don't think Price is going to start throwing change-ups and curves and magically lower his pitch count to 90 per 10 innings or something insane like that. Whoever or whatever got to him after the fourth inning set him into berserk mode and we saw flashes of brilliance. Hopefully Price noticed and takes this game plan into his next start, embracing the idea of throwing his third/fourth pitches whenever he needs to, instead of simply the third time through.