Tonight was vintage Sonnanstine.  He mixed his pitches very well, using three varities of fastball, a changeup, curveball and a slider according to BrooksBaseball.  His most effective pitch of the night was the slider, which he threw 15 times for an 86.67 strike percentage.  Sonnanstine used the tremendous amount of movement he gets on his pitches to generate 11 groundball outs compared to only 6 flyball outs.

Sonnanstine is at his best when he's missing low, and tonight he did just that.  In his previous start on May 27th at Cleveland, Sonnanstine was missing up and out of the zone and basically didn't throw a single pitch inside to the left handed heavy Indian lineup. 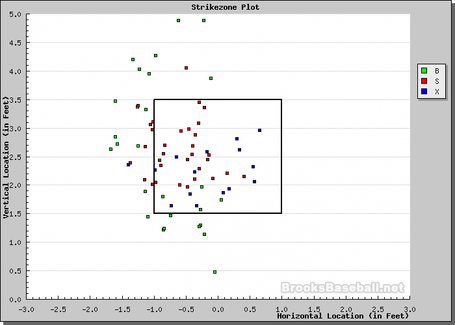 Compare that with last night's game: 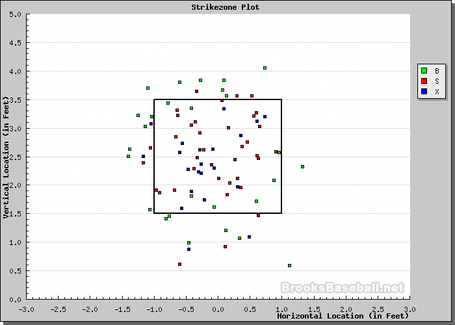 You can see Sonnanstine pitched inside much more to left handed hitters and when he did miss, it was more down in the zone.  You can also clearly see seven pitches on that plot that were called balls that were inside the zone, but since Kyle Davies had 10+ of those pitches complaining doesn't work.  Tonight, Andy Sonnanstine pitched exactly how Andy Sonnanstine needs to pitch to be successful.  Yes, he allowed a couple of home runs, but he didn't walk anyone.  He's going to give up home runs; it comes with the territory of not having dominant stuff.  When Sonnanstine doesn't allow any free passes and has the control and location that he showed tonight it's easy to see why this organization is so high on him.