People keep talking about it, so using PECOTA's comparables from 1980 onwards, and dumping the extremely small sample sizes, I compared the 23-28 year-old projected career paths of Edwin and Sonnanstine. Hoping to see if there's anything worthwhile here. Let's take a look, first at Sonnanstine. The comparables are:

Here's a look at the average of those versus Sonnanstine to date:

So far, Sonny has had one year of topping his comps and one year below the comps. Moving forward, his real "rough year" is projected to take place during the 2011 season. Odds are, he's not a starter with the Rays then, and probably a reliever. Otherwise, things look fine. He profiles exactly as you would expect.

Now, on to Edwin.

PECOTA threw a ton of old-age comparisons my way. We do get a few modern cases though, so that's nice. Here's how Edwin stacks up versus the average:

Above his average, but not terribly so. This is the year that the averages dip down by a tenth of a run, which is interesting since Edwin has improved by more like a full run. After this year though, he forecasts to shoot back up for two years, before settling into a pretty good pitcher.Of course, by then he's already a free agent and on his next team most likely. Gil Meche part two?

Here's how these two paths stack up visually: 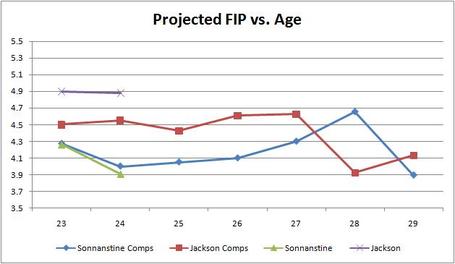 So that's it. Sonnanstine's path is supposed to arch up until he hits 28, then those who survived shot back down. Edwin is supposed to bounce around until age 28 when he has a great year. Do players always follow these paths? Absolutely not. The fact that Edwin was an outlier and reached the majors at age 20 suggests he isn't following a path often traveled. But, this is my way of adding something to that debate. If nothing else, it takes some of the "What if we forecasted him wrong..." talk and adds historical examples to it.

If someone wants to do a more wide scale project with this, feel free to. Links to the PECOTA pages:

Anyways, have at it.