Ron Porterfield is Good at His Job

Share All sharing options for: Ron Porterfield is Good at His Job

Great stuff from Jeff at BTB who used his new injury database to find out which teams have had the most and fewest trips to the disabled list over the years. The most interesting aspect of the Rays results? Only one other team (Seattle) has lost more time from hitters on the DL than pitchers. Thanks Rocco! Here's the general graph, which shows the Rays as one of the more healthy units in baseball since 2002: 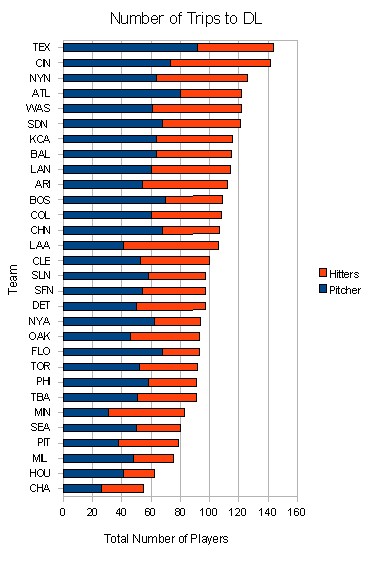 The Rays are amongst the bottom third in total days lost and average DL stint length as well. I'm sure some luck plays into the equation, but given the Rays impressive track record of preventing pitching injuries, I think it's safe to say they know something that some teams in the league don't.