When most teams put a man in scoring position in each of the first five innings, you expect them to score a few runs.  Or at least ONE run.  Well, the Rays are not most teams.

After being shut out by Gil Meche for the first six innings of tonight's game despite many scoring opportunities, the Rays finally got something going in the 7th as Carl Crawford made it 2-1 with his fourth home run of the season.  As Crawford continues to hit well and steal bases at a Brockian pace, the man batting in front of him is beginning to heat up.

B.J. Upton doesn't like to waste home runs.  His first homer of the season was a walk off against the Indians.  His second came the following day, putting the Rays up 1-0 after they had been completely dominated by Carl Pavano for the first three innings.  His third, obviously, was tonight.  With Michel Hernandez on first with two outs, the Rays trailing 2-1, and the prospect of facing Royals' closer Joakim Soria, Upton lifted the first pitch he saw from Jamey Wright into the left field seats.  We've talked ad nauseam on this site about B.J. Upton's struggles and his eventual regression to the mean, but you're starting to see it now.  Upton has a hit in all but one game since May 21st, raising his average from .186 to .218 going into today's game, and is currently on an 8 game hit streak.  I know the Royals don't exactly have a great rotation outside of Greinke but Upton killed them in this series, going 5-11 with 2 doubles, 1 home run, 2 steals, 3 RBI, and 3 walks.  It's clear that his shoulder is still bothering him, and no one knows exactly how long that is going to last, but to all of you fairweather fans out there who have been booing him this season, please don't start cheering as Upton rounds into form.  He startin to get back that swagga. 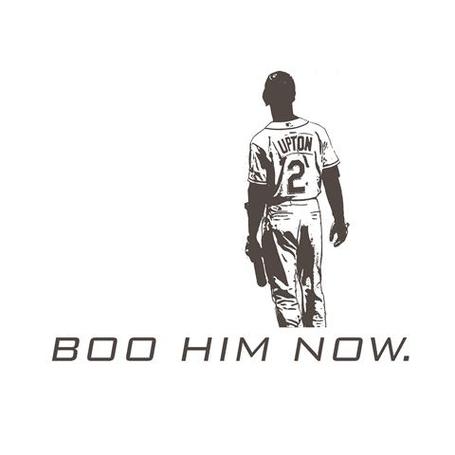