This is really getting old.  I'm not going to recap the bottom of the 9th inning, nor am I going to write a long vitriolic paragraph ripping Dan Wheeler to shreds.  I've already done that too many times to count this season.  But Dan, there is a reason we call you Mr. Low Leverage on this site and why your nickname is Cardiac.  Even with a four run lead I didn't trust you to get three outs.

No one should question Maddon's decision to put Wheeler into the game.  He had already used two of his best relievers in Balfour and Howell and they failed to get the job done, albeit due to some spotty umpiring.  Wheeler just happened to be next in line.  Thankfully he was able to get two outs and allow Randy Choate to convert his third save in as many chances.  I don't know what the Rays plan on doing with Wheeler, but with the way he's pitched this season, and the second half of last season for that matter, I doubt he'll end the season as a Ray.

Just for fun here's Wheeler's strikezone plot, it's not pretty: 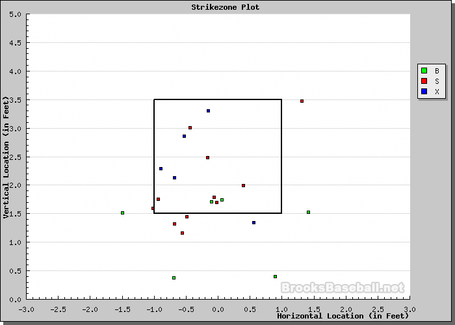 On a happier note, can anyone stop Joe Dillon?  Today he was 3-3 with 3 singles and the game tying RBI in his first ever at bat against Mariano Rivera.  In his past two games he's 6-7 with 6 singles and 1 RBI.  Not too bad for a 4th string infielder.