David Price Is Wildy Effective In Rays Thriller Over Yankees

Share All sharing options for: David Price Is Wildy Effective In Rays Thriller Over Yankees

Wildly effective describes a lot of today's 9-7 victory for the Tampa Bay Rays over the New York Yankees. After four defensive errors, the Rays would put four runs on the board in the ninth inning against the best closer in history Mariano Rivera. Ben Zobrist continues to do what he does. Willy Aybar continues to be a super sub and Joe Dillon continues to just hit. It was a wild finish, but also a wild start for the Rays starting pitcher David Price.

Price, making his third start of the season, was himself wildly effective on the afternoon. Facing a talented Yankees' lineup, he ended with a final line of 5.2 IP, 2 H, 3 R, 1 ER, 5 BB, 3 K and one home run allowed to Alex Rodriguez. The two hits, one earned run, five walks and 107 pitches in 5.2 innings were once again very reminiscent of the Rays other left handed starter, Scott Kazmir. Price was hit or miss today. He threw just 53 strikes out of 107 pitches (49.5%), however, you can clearly see he had a plan; throw inside to right handers and away to lefties. 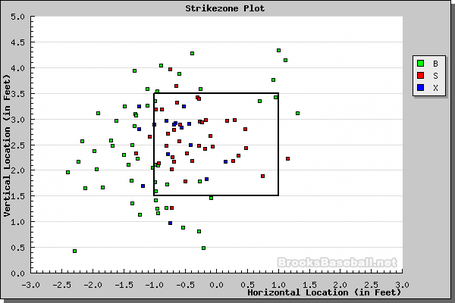 As you can see there are a dozen or so close pitches especially on the right side of the plate. A different umpire and maybe some of those go for strikes, but nonetheless it was another learning experience for Price. Like his first two starts he was predominately a two pitch pitcher. He threw 70% fastballs today averaging 94 mph and maxing out at 97. Even as he approached and went over the 100 pitch threshold he was still pumping 95 mph. Once again Price went to his slider a lot. Averaging 23.3% over his first two starts, he threw 30% sliders on this afternoon, but only threw it for a strike 40% of the time. While Brooks says he threw 32 sliders, it seems that we may have two curveballs in the mix as both had similar breaks and were below 80 mph. The slider was averaging 86 mph today and topped out at almost 90 mph. 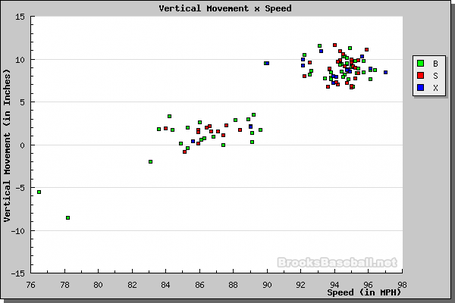 Price has yet to finish the six inning in any of his three starts despite throwing 100, 108 and 107 pitches. Unlike the second start where a high strikeout total inflated his pitch count, pitch efficiency got the best of Price today. If you combined the third and sixth innings he threw 38 pitches, however only 13 of them were strikes. He had eight at-bats of six pitches or more and a few more of five pitches. The Yankees are a good patient lineup and Price was only able to induce five swing strikes. When other teams are chasing it's great to strike out the world, but when you have a team like the Yankees he's going to have to pitch to contact and have more control.

Regardless of the wildness from Price and the Rays in general, they went into Yankee stadium for the third this season and won. They seem to have a secret formula for Mariano Rivera's cutter and a flare for dramatic wins. While I enjoy these types of games I wouldn't mind blowout win behind Matt Garza tomorrow.