Entering tonight's game, 12.5% of Sonnanstine's fly balls were exiting the playing field. That's a touch more than you should expect from a pitcher, but not so egregiously that you would expect a ton of regression. Last year he was on the opposite side of the spectrum by only giving up 8% homeruns, so in some ways he was due for a year like he's had so far. Tonight, 12 fly balls were hit off him, grab your calculators and punch those figures in, you get 1.5 homeruns. Instead, an additional 2.5 left the park. That pushes Sonnanstine's HR/FB up to 15.5%.

Pizza Cutter has done a ton of work finding the R= 0.70 mark for statistics. Here's the link to the pitching stats one. Long-story made short, it never did, even at 750 batters faced. Over 300 batters faced you get a R of .145 and over 750 that number increases to .207. As he says, you cannot get the full picture from one season worth of data. Pitchers that give up a ton of homeruns simply don't exist in the majors. They don't last. Same with pitchers who give up a ton of liners or who get crushed a lot. Knowing that, we can assume the BABIP and homerun fluctuations aren't anything to be concerned about for the long-term.

Let's get back to tonight. Sonnanstine had a 20.1% line drive rate and a .354 BABIP. Those probably regressed a bit, as the latter should continue to do. Compared to previous seasons, there's some statistical differences:

Less strikeouts and more walks couldn't come at a worse time. Sonnanstine's ability to get first-pitch strikes is still right around what you would expect at 60%, his career average is 62.3%. His Contact% is almost identical to last year, same with his total amount of pitches in the zone. Heck, even his O-Swing% isn't too far off his career average. Batters are actually swinging less against him and making more contact out of the zone.  So let's break this down.

Same amount of pitches in zone

Walks up, strikeouts down

All of that put together, and I have to think it's a command issue. If it were a control issue, he would be missing the zone more often. Instead, he's not placing the ball far enough down, up, in, or out of the zone. So batters can still make contact. The pitches out of the zone he is throwing aren't confusing enough hitters to whiff on. This would explain why he threw curves up against Jose Guillen and Miguel Olivo instead of burying them in the dirt and watching both hack like school children. It would also explain why some of his pitches end up over the middle instead of the outside or inside, especially against right-handed batters. See, this: 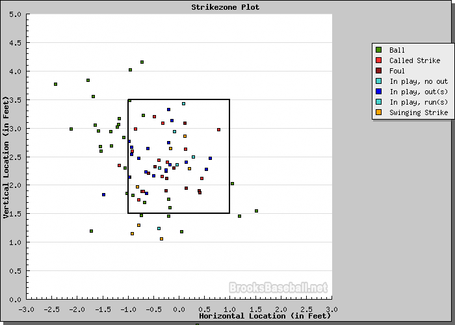 Is this fixable? I don't know. Scouts knocked him on his command in the minors. It's the same complaint given against Jeremy Hellickson. Sonnanstine didn't allow these issues to flare up over the last two seasons and became quite useful because of it. Whatever has caused this retardation of skill; whether it be physical or otherwise, must be eliminated if Sonnanstine hopes to retain a rotation spot throughout the remainder of the season. Scott Kazmir is going to return at some point, and with the way Jeff Niemann has started to pitch, that leaves Sonny as the guy heading to the pen.

Amusingly, some of these same problems plagued shaggy-haired starter J.P. Howell before he moved to the bullpen and became the iceman of the staff. I'm not saying Sonnanstine is going to become Howell nor am I saying this is anything but a long, and potentially tedious, outlier year for Sonnanstine the starter. I'm simply saying yeah, there's a precedent for this happening on the Rays staff. And hey, wouldn't that be something if Sonnanstine became that bullpen arm we've been looking for?