James Shields Gets No Support In Jays Shutout Of Rays

Share All sharing options for: James Shields Gets No Support In Jays Shutout Of Rays

Canada Day seemed a lot like groundhog day to James Shields. For the first seven innings of today's game Shields pitched well; real well. Unfortunately, once again the leagues best offense decided to take a day off on the day he pitched. Sans two eight h inning home runs, Shields kept his team in the game and got the Dan Haren treatment. The Rays took a loss in the series finale 5-0. It was the third time the Rays have been shutout this season; twice with Shields on the mound.

The Rays have scored 69 runs in Shields's 17 starts this year. That's just over four runs a game. Much has been made of the Diamondback's support or lack thereof for Dan Haren (68 runs in 16 starts), but Shields has been given just one more run of support in one more start. Looking deeper, the offense has scored just 46 runs while Shields is still in the game or 2.70 runs per start. The same offense has given Jeff Niemann 68 runs while still in the game (4.53 runs per). That's 22 more than Shields in two fewer starts.

Shields allowed two earned runs (three runs overall) on five hits and a walk in the first seven innings. He struck out eight batters and got 11 swinging strikes. He finished the seventh inning with 101 pitches. Having allowed a home run in the seventh and being over the magic 100 pitch threshold with his team down 3-0, I figured Shields was done for the night. However, Shields trotted to the mound in the eight and retired Aaron Hill before giving up back to back home runs to Adam Lind and Scott Rolen. Both of the homers were hit off of change ups that were left up and over the plate. 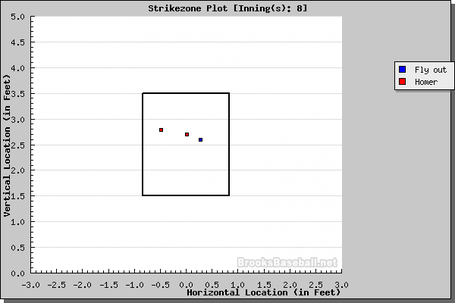 It looked as Shields didn't have a good feel for the change up today. He only threw 16 of them total and got 50/50 results in terms of strikes on the pitch. A normal Shields starts would mean nearly ¼ of his pitches would be change ups. Shields threw more sliders (21) and almost as many curves (13) as he did his signature pitch. Without his go to pitch, Shields threw more fastballs (46%) than normal. I don't know if the Rogers Centre guy is a bit fast, but Shields averaged 92.15 mph on the heater and maxed out at 94.5. Coming into the game he was averaging 90.0 even on his fastball.

You hate to see Shields pitch well and the team come up empty; literally. However, you must tip your hat to Ricky Romero for dominating the Rays (take note David Price).  The Rays had a chance to sweep the Jays well into fourth place, but settling for two out of three against a division opponent in their home will have to do. Don't look now, but even though the Rangers aren't division opponent, they are a wildcard contender. The Rays hold a one game lead over the Rangers, who face the Angels tonight. The Rays will need to take two out of three in Texas to make this trip a real success.