The Scott Kazmir rejuvenation tour made another stop tonight and we witnessed an entirely different pitcher. He wound up walking one more than he struck out, but 12 of his 17 balls in play were of the ground ball variety.  Kazmir's fastball apparently averaged 93 miles per hour and topped out at 95.2. That looked way too good to be true, so I ran tonight's average velocities against the data provided to FanGraphs by Baseball Info Solutions. Here's what I got:

An average of 2 MPH gained and not a single pitcher had down velocity. That means Kazmir was probably closer to 91 and topped out at 93. That or the rest did everyone really, really well.

The strikeout and velocity figures don't reflect how hack-inducing Kazmir's stuff was though. 11/101 pitches ended with swings and misses. Despite swinging out of the zone a lot, the Royals do make a fair amount of contact when they swing. So it's probably fair to say Kazmir should get the share of credit for the whiff rate. Let's look at Kazmir's stuff. 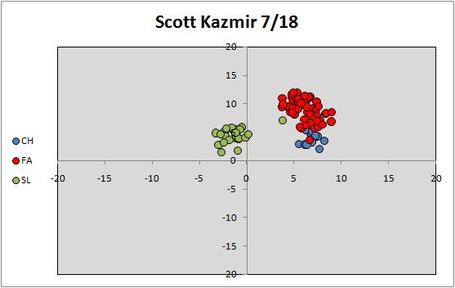 (Yes, that ‘slider' is most likely a fastball)

Everything looks just about right. Kazmir's fastballs have a clear two-seam/four-seam cluster effect working. They were getting very good rise and run towards lefties. His slider had some nice break towards righties. Kazmir's velocity remained constant throughout the game, 94 (unadjusted) on his final fastball of the night.

He left the game with "cramps in his lower left forearm". It's reportedly minor. His performance certainly didn't show many signs of serious injury.

Chad Bradford's BABIP entering tonight was .571. It only went up. It'll only go down.