Rays Walk Their Way To A Win, Sweep Royals.

Share All sharing options for: Rays Walk Their Way To A Win, Sweep Royals.

The Rays don't like to make things easy.  The team just completed a three game sweep of the Royals on the first leg of this important 10 game road trip, but had to come from behind in the 8th inning of each game to do it.  Never the less, sweeps are fun.  It was the team's fifth sweep of the season, second against the Royals.

-Today's game is just more evidence in the case for having robot umpires.  The calls behind the plate were bad all around as each team benefited at least a couple of times.  Mike Jacobs is not a patient man.  He's walked just 25 times this season, and ONCE in his past 16 games.  Today he walked not once, not twice, but thrice.  Here is a graph of Mike Jacobs' strike zone today against Matt Garza; Blue dots are balls, Red dots are strikes: 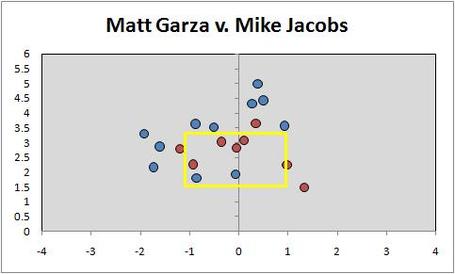 Mike Jacobs should never walk three times in a game.  If that happens again this season you can assume there's a problem somewhere, and it's probably not with the pitcher.

-Matt Garza didn't quite have it today, getting himself into a couple of tough situations.  He only allowed three runs, but it could have been much worse seeing as how he gave up five walks in five innings.  Yes, he was squeezed a couple of times but it was obvious that his command wasn't there today.

-As I mentioned before this was the third game in a row in which the Rays came from behind in the 8th inning.  Evan Longoria was the hero Friday, Pat Burrell and Willy Aybar shared the honors Saturday, and today it was Gabe Gross.  His RBI double in the 7th inning cut the deficit to one, and his bases loaded walk in the 8th put the Rays ahead for good.  Yes, I know he got a lucky call on a ball that should have been strike three, but the Royals got those same calls throughout the game.

-Did Joakim Soria sleep with Trey Hillman's wife?  Or his daugther perhaps?  Both?  If he hasn't yet he may want to start.  The Royals just got swept, with each game being close in the late innings, and Soria did not throw a pitch.  With one out inn the bottom of the 8th inning of today's game the score was tied and the bases were loaded with Rays.  This seems like a good place to bring in your best reliever, and one of the best relievers in baseball right?  Not to Trey Hillman, who brought in Ramon Colon.  After striking out Pat Burrell, Colon then walked in the winning run.  I may be crazy, but I doubt Soria does that.  Maybe this mock blog post by Rany Jazayerli was actually correct, maybe Soria WAS too rested to pitch?

-These were important wins.  The Rays needed to come out strong after the All-Star break and start this 10 game road trip off on the right foot.  They did just that.  Keep it going to Chicago.