Plate Discipline Results as a % of Total Pitches Seen

Share All sharing options for: Plate Discipline Results as a % of Total Pitches Seen 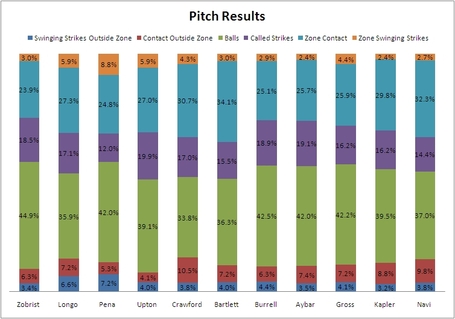 This chart looks at the plate discipline results of each player based on all pitches seen. Some observations:

*Ben Zobrist leads the league in ISO yet only 3% of the pitches he sees in the zone result in swinging strikes. For comparison Longo and Pena sit at 5.9 and 8.8% respectively.

*Longo seems to be having issues with pitch recognition. 13.8 % of the pitches he sees result in swings out of the zone while also taking 17.1% of pitches for called strikes.

*10.5% of the pitches Carl Crawford sees result in contact outside the zone.

Zorilla leads the team with nearly 45% of the pitches he sees resulting in called balls. For reference, Navi only takes 51.4% total pitches.

Below is the table of data: