Let's look closer at the newest reliever in the system, Jonathan Meloan.  First, his percentage stats from the last few minor league seasons:

Despite the inflated homerun ratio, Meloan has actually pitched pretty well in Triple-A this season.  His walk rate is down and his strikeout ratio isn't poor despite inducing less whiffs. These numbers are nothing compared to his lower level numbers prior to 2007, where nobody could hit him. The Dodgers threw him in the rotation, something that didn't work out overly well. Since returning to the pen, Meloan hasn't shown that same domination although he has been pretty decent.

Let's look at his Pitchfx profile.

Fastball: 91-93 MPH, some cutting action inside to righties, tops out around 95.

Here's a look at a game chart from a Meloan appearance: 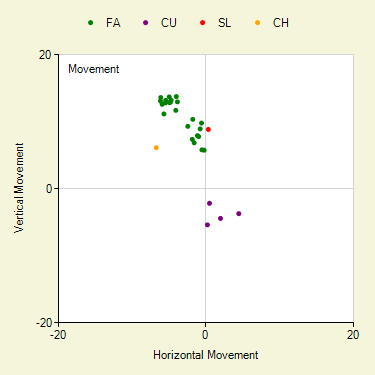 It seems to me he may throw a two-seam fastball as well. Gameday classified both as four-seamers, so in reality there's a chance he throws a 90-92 two-seamer and 92-95 four-seamer. Throw in the slider as his outpitch and a plus looking slurve, and there's definitely some good stuff being thrown by Meloan.

So what's wrong with his performance in Triple-A this season? Apparently 14% (!!!) of Meloan's fly balls allowed are leaving the ballpark, simply put, that's unsustainable for a pitcher that seems to have quality stuff and an otherwise good performance at the level.  Checking on Columbus park, it's very, very susceptible to the long ball. Statcorner's park factors have the park's HR/BIA factor at 122. Using MinorLeagueSplits and removing the ‘luck' aspect (aka excessive homeruns) of Meloan's performance, his FIP falls to 3.70.

I'm not going to say his true talent level is 3.7, since even when luck is thrown out Meloan's FIP is still in the ~4.2.-4.5 range for most of his Triple-A experience. CHONE and ZiPS agreed that Meloan's true talent projection sat between 4.4-4.9. Which...somehow, would make him the second worst reliever on the staff.

Accepting the fact that Abreu was A) gone either way, B) only here for a few months, it's hard to be too disappointed at this return. Meloan is the Rays property for at least the next six seasons and has the makings of a potentially above average reliever.