Share All sharing options for: Jeff Niemann Bends His Way To Victory

I'm pretty sure Jeff Niemann hates this website.  He's probably doing this to spite us.  We haven't been his biggest supporters this season, but if he continues to pitch like he did tonight that might have to change.

Niemann has thrown a couple of shutouts this season, but tonight was probably his most impressive performance to date.  Unlike the Royals and A's, the White Sox have a decent lineup.  That didn't effect the Big Nyquil.  Niemann didn't walk a batter and strike out seven in eight solid innings.  Of the 100 pitches he threw 10 were swinging strikes, and none were more important than the ones he got in the seventh inning.  With the bases loaded and one out and the Rays trailing by one, Niemann struck out Scott Podsednik and Alexi Ramirez back to back on two 12-6 curveballs.  When he needed a big out tonight that's seemingly how he got it.  Niemann has improved this season as he's gained more trust in his curveball.  We can all be thankful he has, because if he doesn't get Podssednik and Ramirez out the Rays do not win this game.  Period.

Either Niemann knows he can't hit the left side of the plate or he's severely allergic to it.  Here are his strikezone plots against RHH and LHH: 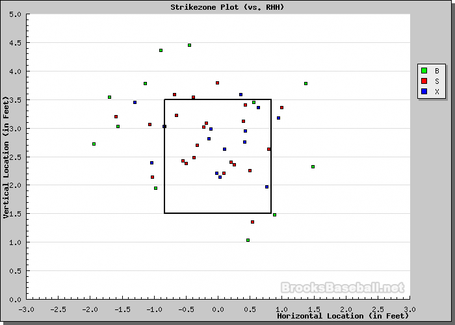 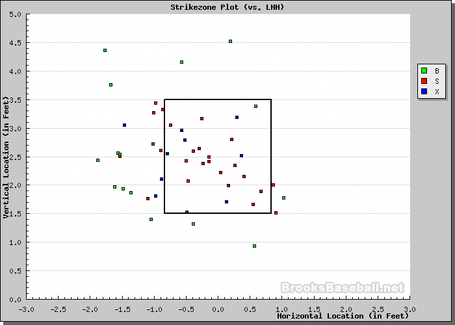 RHH get the ball higher and inside, LHH get it lower and away.  Whatever works.

-Besides the performances of Niemann and J.P. Howell this game was rather boring.  The offense provided little support against Clayton Richard, who had gotten shelled his past five outings.

-Ben Zobrist extended his hitting streak to 11 games, so that's something.

-The Rays did not score a run tonight via a hit and won the game 3-2.  Two sac flies and a bases loaded walk.  That's it.  That can't happen too often.

-Good to see Joe Dillon is still alive and well.  I'm sure his family was worried.

-Seeing Bobby Jenks implode tonight makes me angry that the Rays didn't get to him the night before.

-According to @SunSportsFOXFL this is the first time all season the Rays have won after trailing after 8.

-I'm relieved the Rays won without Crawford and Pena starting, but I'm %110 percent certain that people in the local media will still complain about it tomorrow.