Is There Hope For The Bat? Pat Burrell vs History

Share All sharing options for: Is There Hope For The Bat? Pat Burrell vs History

Looking at Pat Burrell's baseball-reference page, I noticed that Danny Tartabull was listed as the most similar player statically to Burrell through age 31. Much like I did with Carl Crawford and Roberto Clemente, I took a peek at Tartabull's production going forward from the age he shares with PtB. The results are pretty interesting and actually offer a bit of hope if you believe in things of this nature.

As a member of the New York Yankees in 1994, a 31 year-old Danny Tartabull hit .256/.360/464. Last year at age 31, Pat Burrell hit .256/.367/.507. They were dead even in batting average and their OBP's were within single digits of each other. Burrell puts some distance in between himself and Tartabull in the slugging category. Burrell hit 25 more extra base hits; however he had nearly 200 more plate appearances.

This year Pat Burrell has been a bit disappointing to put it lightly. He's shown slight signs of a breakout, but we've yet to see that a sustained hot streak last more than a handful of games. There are some of us that hold out hope that he will some how turn it on, but looking at Tartabull's numbers it may not come; at least this season.

Tartabull split 1995 between the Yankees and the Oakland A's. As a 32 year-old, he amassed only 328 plate appearances in 83 games. Since Burrell has only played 61 games this year and has 240 plate appearances, we can kind of size up Tartabull's 1995 season with Burrell's to date.

*stats as of Tuesday afternoon

As you can see the comparison holds true. Burrell is experiencing the same type of season as Tartabull did in 1995. A drop across the board in slash lines as well as a steep drop in ISO power. Now, Tartabull's drop is less than Burrell's .130 plunge, but again, Burrell had more power to begin with. They also saw increases in strikeout totals while their walk percentage decreased. In fact, Burrell's strikeout percentage is his highest since 2006 while his walks rate is the lowest it's been since 2003.

In the opening paragraph, I said this article would offer hope to those who believe in comparisons; here is that little glimmer of hope. During the 1996 season, the 33 year-old version of Danny Tartabull played in 132 games and went on to post the following numbers .254/.340/.487 with 53 extra base hits. His ISO jumped from .143 to .233.

Sure, it's not exact science, but history shows that this type of thing happened to a similar player and he rebounded a year later. Of course, history also saw Danny Tartabull finish his career at age 34. In his final season (1997), he appeared in a whopping three games going 0-11 with four strikeouts for of all teams, the Philadelphia Phillies. 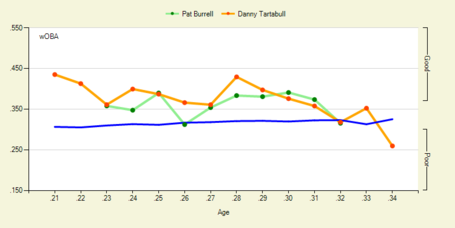 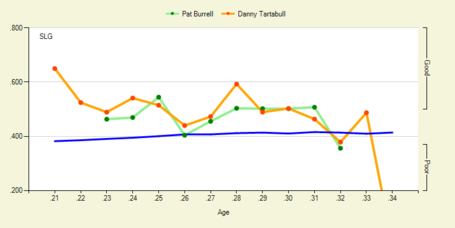 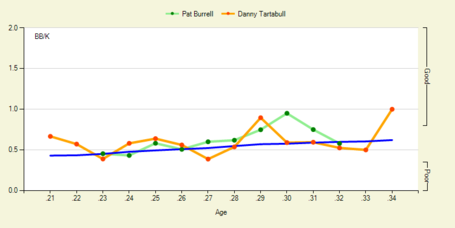 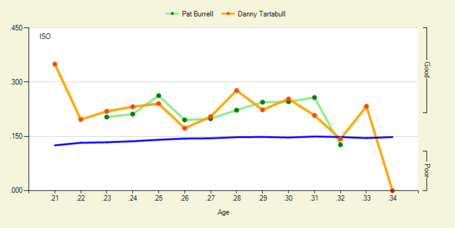