Rays Get A Hit And A Win; Matt Garza vs. Roy Halladay Round 3

Share All sharing options for: Rays Get A Hit And A Win; Matt Garza vs. Roy Halladay Round 3

It wasn't the Thrilla in Manilla, however the third installment of Matt Garza vs. Roy Halladay lived up to the hype of a prized heavyweight fight. In this the third and possible final battle between these two rival right handers, we everything and more from each starter.

Here is a quick look back at the previous two match ups that lead to tonight's wonderful duel.

More on Garza/Halladay III after the jump...

Both turned out to be victories for The Rays and for Garza setting up tonight's showdown in Toronto. In what could be his last start for the Blue Jays, Roy Halladay gave the Rays everything he had. Unfortunately for Halladay, his nemesis, Matt Garza was right there with him. Literally going pitch for pitch (116 for Garza, 115 for Halladay), Garza and the Rays outlasted Halladay and the Jays to push Garza's record to a perfect 3-0 against Halladay. Here are the numbers from tonight's match up:

To say they saved the best for last (possibly) would be an understatement. Garza literally saved his best for last in the 9th inning. After already having thrown 99 pitches, Garza stepped on the mound in the bottom of the ninth and blew away the best three hitters in the Blue Jays line up: Aaron Hill, Adam Lind and Scott Rolen. He threw 14 fastballs in his final frame with none of them dipping below 94 mph. He also got five of his 10 swing strikes in that final frame of work. The most encouraging part of the Crane's start was no walks. In a very Zen like manner, Garza said he made an effort to limit his walks because he wanted to "keep guys off base that didn't deserve it." Deep.

On the night, Garza attacked the Jays with his fastball. He threw it early and often registering nine strikeouts. 84 of his 116 pitches (72.4) were fastballs. He average 94.4 on the heater this evening maxing out near 97 at 96.6. Accompanying his fastball were 16 sliders, seven curveballs and six changeups. 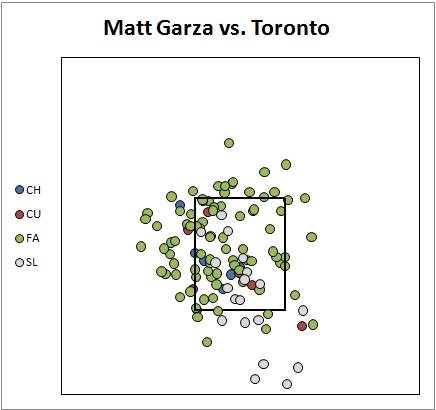 If this was the last match up between the two, we all witnessed a great battle. Garza, himself, explains what it's like to go toe to toe with Halladay. "I just try and go pitch for pitch with that guy. He's the best." Well tonight, the Rays were just a bit better.

Offensively, the big story was in the first inning when the Rays got a HIT! Carl Crawford's first inning single ended Halladay's bid for a perfect game/no hitter. The Rays would score their first two runs without the benefit of a hit as two sac-flies put the Rays up 2-0. It wouldn't be until Evan Longoria's two run double in the 10th inning that the Rays would get a run in via a hit. After seeing three breaking balls from Scott Downs, Longoria lined the fourth one into left field dropping just in front of Joe Iglett. The Rays would go up 4-2 and the Iceman, J.P. Howell would enter in the bottom of the 10th. After two strikeouts and a line out, the game was over; J.P. In, Game Chilled.

Note to Michel Hernandez, you're a much better hitter when you don't swing.