Price was knocked around today. 3 IP, 18 TBF, 3 HR (on 10 fly balls), zero walks, and a strikeout. His command wasn't bad (38/56 strikes) but his location/command were horrible. Something worth noting: Price threw more curves today than he has before. Check this: 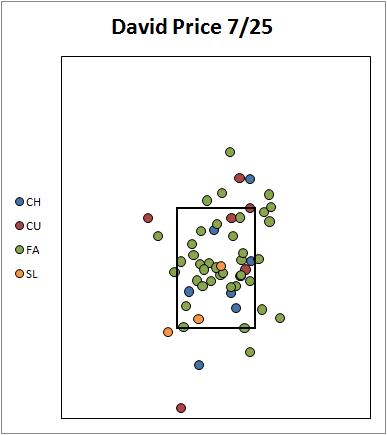 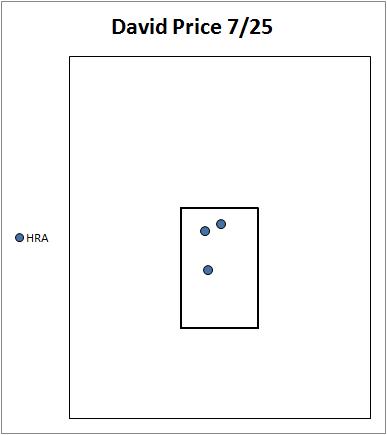 Thanks to those pitches, we're now burdened with a bunch of comments calling for his demotion. He sucks. He's overrated. Hickey ruined him. Whatever. Over the last 30 days (entering today, mind you) Price's FIP is 4.47. His ERA 5.49. Yes, the walks are still up, but so are the strikeouts. We've discussed that his walk rate is going to drop (speaking of which, 3 walks in the past 70 TBF; 4.2%) but the simple truth is, over the last four weeks, he's pitched as well as James Shields.

I guess you could send him down, but he's starting to show confidence in his curve and change-up. His fastball command has and will probably always be spotty. That's what got him in trouble today, nothing else. His velocity was fine, his movement was fine, his command today was hellacious. It happens.

The home runs today will kill his FIP, his tRA, and the perception around him, but he hasn't pitched poorly as of late; in fact he's been pitching right to league average expectations. If you weren't in favor of sending him down a month ago, you definitely shouldn't be in favor now.