Share All sharing options for: Rays End 10 Game Trip 6-4 After Loss To Jays

When the Rays started this 10 game road trip I think everyone would have been satisfied with a 5-5 record.  Instead the Rays come home having won six of the ten games.  What is their reward after a 10 game, three city, no days off trip?  A three game series against the Yankees.  Oh boy.

-Jeff Niemann finally came back down to earth today.  We've been saying it for awhile now, but there was just no way he could continue to be as good as he was over his last couple of starts.  Niemann only walked one batter, but his control just wasn't there today.  As you can see, he was all over the place. 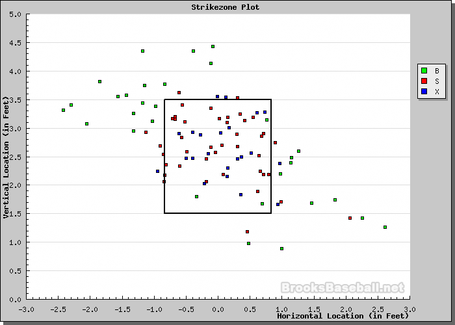 It didn't seem like he had the same confidence in his curveball that he had shown in his past couple of outings.  In his July 21st start against the White Sox he threw 100 pitches, and 22 were curveballs.  Those curveballs had a strike percentage of 68.  Compare that with today's numbers of 94 pitches and only 10 curveballs that registered a strike percentage of 50.  If he is going to continue to succeed this season and beyond he needs to be able to locate that curveball.  Whatever the reason was, Niemann did not have it today.  At least his next start will likely come against the punchless Royals and not the Yankees.

-The Rays were either tied or were trailing in every game of the road trip going into the 7th inning, yet somehow managed to win six of those games.  It was a very odd trip overall.  The three comeback wins over the Royals where Joakim Soria somehow never threw a pitch, the comeback against Jenks, the bizarre 7th inning in the third game of that series, the Buehrle perfect game, the Garza/Halladay duel, the eight run comeback, etc.

-It was an eventful road trip for J.P. Howell.  He recorded five saves and one win over the 10 games.  He only allowed one hit in 5.2IP while striking out 10 and walking one.  He good.

-The Rays 1-5 hitters accounted for all of the team's five hits today.  The bottom of the order with 0-17 with 5Ks and only 1BB.

-The bullpen only had to throw 20 pitches today, so that's something.