Share All sharing options for: The David Price Pitchfx Analysis (Part One)

Be warned: this is the graphs version. Latter on I'll go with numerical data.

What pitches is Price throwing? 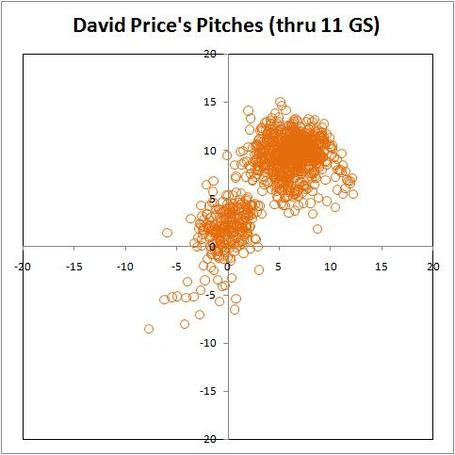 Fastballs and sliders. Lots of them. This graph isn't taking velocity into account, but we can see some change-ups and curves throw into the mix as well. The change-ups are mixed and matched in the fastball clusters, the curves are not. See those pitches down in the lower-left quadrant? Yup, those are the spike curves. Or at least, those are the spike curves that actually broke like spike curves. We'll get to the exact numbers of each in part two, the purpose of this graph is basically to give you a feel of how the pitches break in comparison to each other. Don't be alarmed by the lack of movement in the slider either. Most sliders are straighter than fastballs; they're more or less straight lines, compare to the fastball arching path.

Where are the pitches ending up? 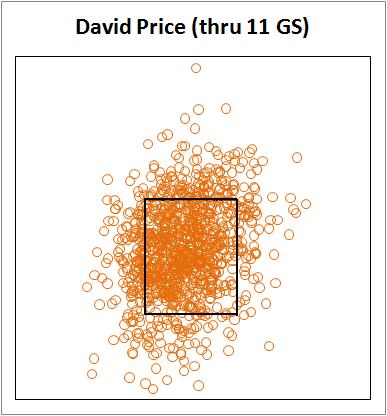 This is from the catcher's perspective. So, let me answer the easier question in "Where aren't the pitches ending up?" Price has a fear of the low outside corner; meaning down and in to lefties and down away to righties. The disparity from the left-handed inside corner of the plate versus the right-handed side of the plate is striking. Either Price simply doesn't have the ability to hit that corner, or he doesn't want to.  If the former, wouldn't he have hit it by accident? If the latter, why not?

What pitches are being called strikes? 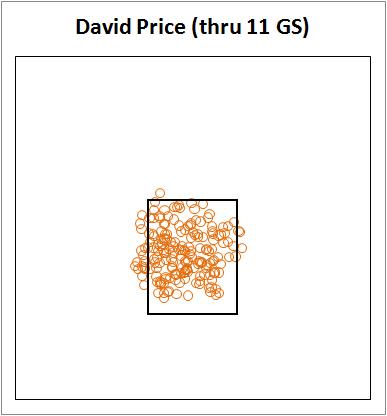 The normalized strike zone has flaws, but David Price isn't facing a group of midgets every time out. He never, ever gets strikes called in the lower part of the zone. Is it because umpires think of him as the wild gunslinger with unharnessed fastballs? Price does get calls inside to righties, but again, the left-handed batter side of the plate is left untapped. That's the side Price is throwing from, in theory he should be able to pick apart righties by mixing in pitches away, and show that gusto and courage by going in on tough lefties. He doesn't though.

What pitches are being called balls? 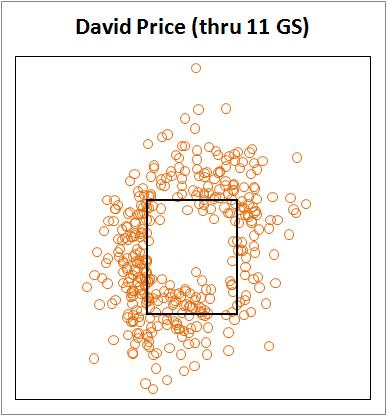 This is a trend. Price pounds it inside to righties but hardly to lefties. He misses up and down more than he does to the first base side of the plate. Notice that low part of the plate, talk about a squeeze job. Yes, some of those are legitimate balls against certain batters, but relative to his called strikes plot, I refuse to believe Price is getting the proper calls at the bottom of the zone that he should be.

Where is Price throwing his pitches to induce whiffs? 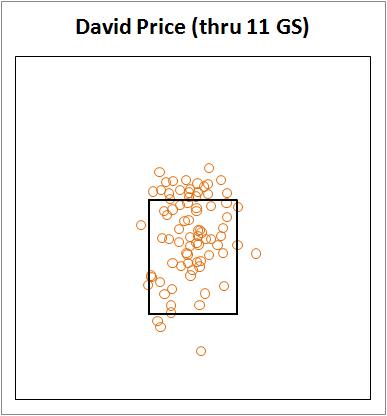 Tons of high pitches, some low, a lot over the middle, but few inside/away. Scroll back up to the called balls graph and look at all the borderline pitches being thrown then compare. Nobody swings at Price's borderline fastballs. Nobody. Throwing a heater away just isn't working for him. Maybe the movement hurts him, maybe the fact that batters can look away against him, I don't know, the simple fact here is that nobody is swinging at those borderline pitches.

What do we take from this?

Price simply doesn't use the first base side of the plate. Batters can sit back and look middle and inner/outer half. For righties, this means looking inside, for lefties, looking away.

Odds are it's not a strike if Price's pitch is to the bottom part of the zone.

Price can induce whiffs over the middle of the plate.