Where Did James Shields's Change Up Go? A Look At Big Game James Recent Pitch Selection

Share All sharing options for: Where Did James Shields's Change Up Go? A Look At Big Game James Recent Pitch Selection

James Shields is the Rays ace until further notice. Unless Cliff Lee comes walking into the Tampa Bay Raysclubhouse this week, Shields will remain the top dog in the Rays yard. Shields has been as solid this year as he has been in any of his previous three years. Despite a 6-6 record, his ERA is a 3.70, and his 3.81 FIP would be a career high. Shields is also nearing the 3 WAR mark and is well on his way to the 4 WAR mark for a third consecutive season. Nonetheless, Shields has struggled over his last six starts.

Right away, I thought Shields must be a victim of some bad luck. The home runs may be his fault, but surely the 44 hits must be some sort of BABIP fluke. Over the last six starts, Shields's BABIP is .309. It's .310 on the season and .303 for his career. So there goes that theory. To further debunk the bad luck hypothesis, Shields's LOB% of 71.8% since 6/20 is actually lower than his 73.9% on the year.

With luck out of the picture, I went to pitch selection. Here are the percentages of pitches thrown and their velocity's on the season for Big Game James...

One thing I've noticed is discrepancy between the pitch data from Fangraphs and Brooks Baseball.Fangraphs credits Shields with a lot of cutters thrown and not many sliders. Brooks is the exact opposite. Whatever the pitch is, a slider/cutter hybrid, Shields is throwing it a lot more lately and forgetting his best pitch, the change up. Here is the same data for the last six starts...

The "hybrid" as I'll call it, has replaced the change up as Shields's #2 offering. With the move, has come a shift in the type of pitcher Shields has become. For his career, Shields has averaged 37.8% fly balls. This year has been no different for the most part at 38.0%. However, during the last 30 days that number jumps to 43.6%. Shields has a HR/FB% of 10.7% for his career. That number has held true during this time frame (10.8%). This is not good since Shields's has been giving up nearly 6% more fly balls than normal hence the 1.37 HR/9 over the last six starts. Hitters are also making 4% more contact overall.

We all know when Shields's has his good change up going he can pound the zone and keep the ball on the ground or get swings and misses. Over the last six starts, Shields has been throwing that good low change up. 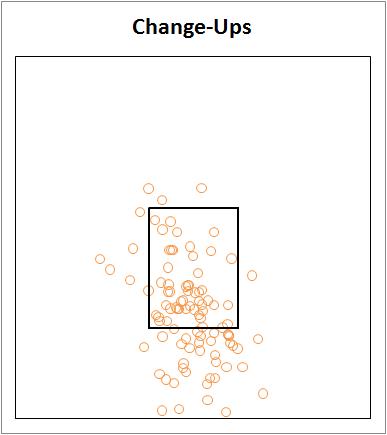 Notice most of them are below the hitters belt? Now look at the hybrid, which we'll call a slider in the next graph. 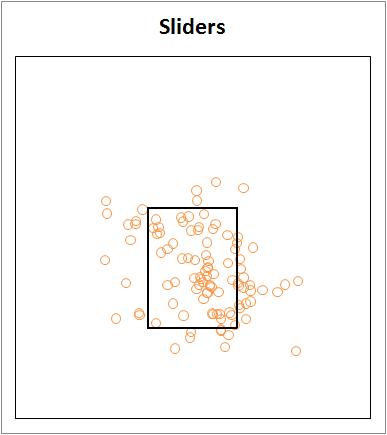 As you can see, this pitch is throw over the middle of the plate and up. At 85-87 mph, this is not the optimum location for this pitch. This is probably has something to do with the increase in flyballs we've seen. Just to further illustrated the difference in effectiveness, during this time frame Shields has gotten 14% swinging strikes on the change up while only 6.8% on the hybrid slider/cutter. There could be a lot more factors involved here, but the decrease in change ups, the lack of command on the hybrid, and the increase in flyballs are a bit concerning.

Big Game James takes the mound tonight for the Rays in what is the most pivotal series of the season. The Rays are already 6.5 games behind the Yankees, and if they get any further back winning the division will by almost impossible. Often we see pitchers try new things and lose sight of their best pitches. We saw this in spring when David Price "lost" his slider while working on a change up of his own. Sometimes change is good thing, but for Shields this change in pitch selection has not been; Tonight, he should try going back to the change (up) that got him this far.