Share All sharing options for: The Michel Hernandez Effect on James Shields

I'm not a big believer that Michel Hernandez changes games with his pitch calling and framing. Still, I decided to take a look after pulling James Shields pitchfx data and noticing that Hernandez had about an equal number of starts as Navarro. I decided to derive run values from Shields starts with each catcher, these are the set of values I used:

If this looks familiar, it's because these numbers go into wOBA and other linear weight statistics. For a pitcher, you want this number to be negative, for a hitter, positive. Imagine my surprise when the numbers showed that Navarro's games resulted in a run value of 5.26, while Hernandez' resulted in a run value of -2.94. That's nearly a full win swing in the matter of four fewer games.

So what in the world is going on? Well, I don't know.

The splits involving pitch usage, strikes, and so on. break down like this:

No difference. Hernandez' duties have seen more whiffs, but the strike% is nearly the same still. There has to be something in the pitchfx graphs that would suggest why the results are different, yet the usage and strikes are the same, right? Not really: 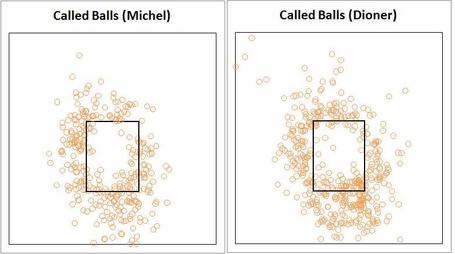 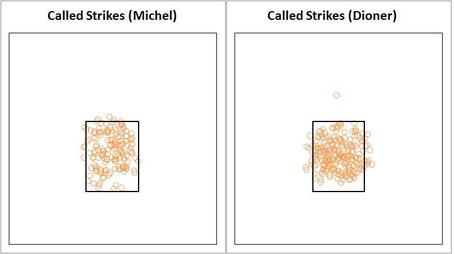 Maybe you can argue that the locations are a bit more spread out in Hernandez' graph, but there's not a ton of difference between the two. Could Hernandez mix pitch selection up better while still using the same percentages? Sure, I'm not sure how to check that in a timely manner, but it's totally possible. It's also possible that this is nothing but luck and random variation. In fact, I'd call it likely.

*Strike% does not include foul%, which is why the number looks low.