Getting Defensive About the Offense

Share All sharing options for: Getting Defensive About the Offense

But it's still the same pattern as last year: 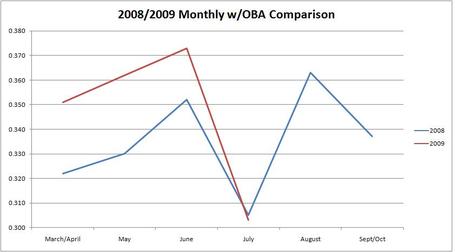 Here's the thing, every offense goes through these stretches. The Rays have a .349 team wOBA, the only team with a wOBA over .350 is the Yankees. The Angels are at .348, the Phillies at .346, and the Red Sox at .344. Throw all five teams wOBA by month and this is what you get:

The Rays had the highest tally entering July and now have the lowest. This is the best the Yankees offense has played, and guess what, the Rays were better in June. With the exception of that well-oiled machine playing in a sandbox, every other good offensive team has went through at least one poor offensive month. The Angels had May, the Phillies June, the Red Sox have July, and the Rays have July. Yes, the low sucks, but the high was ridiculous last month. Having an egregiously poor month is really nothing new.

Only two teams since World War 2 have scored 1,000+ runs in a season. The 1950 Boston Red Sox and the 1999 Cleveland Indians; here's their monthly OPS breakdown:

Look, two ‘down' months! Unfortunately we don't have the 1950 splits available, but if we lower the runs scored threshold to 950 we get some more teams to look at.

SEA had two poor months (relative to the rest of their year.)

COL had one out of this world bad month.

What comes next is the volatility argument. So here's what I did. I took each team's RPG, rounded that up or down (because I wasn't willing to go by hand to see whether a team scored 6.04 runs that day or not), took total number of games over that average and divided it by total games played. Yes, the Rays rank last, but this is against the best offensive teams of all time. Nobody, but nobody, is claiming the Rays to be that good offensively. If the Rays average 5 runs for the entire season they would still score at least 140 runs fewer than the worst run scoring offense on this list.

The difference between 45% and 48% is 5 games - cue someone making the "But that gets us into the playoffs..." comment (Yes, if we hold them to less than 5 runs that day), but all that talk about how streaky we are is pretty much moot. Stacked up to the greatest offenses ever, based purely on runs scored, we're fine. This isn't wOBA, or expected runs scored, or anything like that. This is how many times a Rays player has stepped on the plate and had it count on the scoreboard.