After the Rays spent the morning and afternoon in silence on this deadline day, the play on the field and the subsequent concert after was heard loud and clear tonight. Sure, it was against the Kansas City Royals. And yes, Sidney Ponson was the opposing starter, but after all the negative we've had over the past few days I'm here to focus on all the good from tonight's game.

R.J. gave you the offensive monthly overview on Thursday, and if you follow the trend you'll see the Rays offense should get going in August. You've also heard us mention that Carlos Pena has a career OPS of over 1.000 in August. While we hope all these trends continue to happen through August and September, Pena and the Rays got a jumpstart on July 31st.

Pena has looked completely lost at times this month, but with two on and two out in the 1st inning, Pena blasted a three run shot off the left field pole. Three was a popular number for the Rays as three players had triples. Carl Crawford tripled for the 90th time in his career and Pat Burrell tripled for the first time as a Ray. Not to be out done, Ben Zobrist hit his sixth triple of the year, tying him with CC for the team lead.

Thanks to RBI base hits by Burrell, Jason Bartlett and Gabe Gross, the Rays chased Ponson after 4.1 ineffective innings. His counterpart on the night, the velocirator, David Price was extremely effective. Without striking out the world, Price was as effective and efficient as I've seen him this year.

More on Price's start after the jump

DP worked seven innings for just the second time in his career. Unlike the first start in which he gave up five earned runs and two homers, he gave up just one run today and that came on a fielders choice. He scattered five hits and walked just two. As mentioned above, he didn't strike out the world. He had just three punchouts and got just seven whiffs. The nice part was he induced 12 groundball outs by keeping the ball low (Flo Rida pun not intended). Nearly half his pitches came "below the belt" of the hitter in the normalized strike zone. 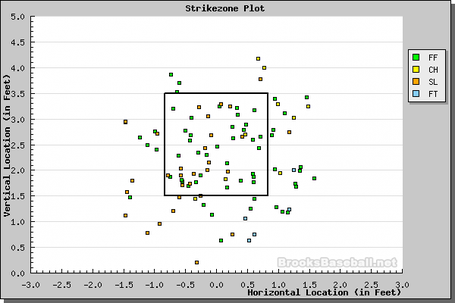 Price pounded the whole strike zone 64% of the time using his fastball, slider and change up. On the night Price threw 62.5% fastballs, 28.8% sliders, and get this, 8.2% change ups. Coming into the game, he was averaging 69.0% fastballs, 23.9% sliders and just 5.6% change ups. More variety seemed to work very well for him tonight as Price used all three pitches in different counts keeping the opposition off balance. 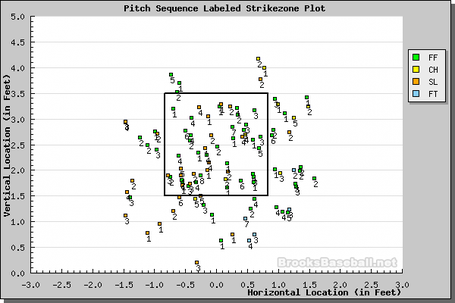 Price also used the entire plate which is something we haven't seen too often from him. It's been said that Price is very predictable in terms of pitch location. He works inside to right handers and outside to lefties. For some reason he has seemed to avoid the first base side of the plate. This was not the case tonight as he had almost even distribution to both sides as you can see in the charts above.

Sure it's only one start for Price and just one good offensive game for the Rays, but now that we know this is basically the team we are going to battle with in the second half. The sustained win streak and solid play that Joe Maddon has preached about has to start some where and I think tonight was a good night to start that. Of course, a loss tomorrow against Bruce Chen makes this last paragraph completely irrelevant so let's try and avoid that if possible.