The Worst At-Bat of the Season

Share All sharing options for: The Worst At-Bat of the Season 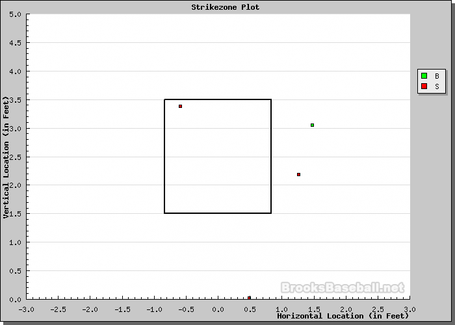 Debate the pinpoint accuracy, the borders of normalized strike zones, and whatever else, none of it matters here. Simply put, there is no explanation as to why Dioner Navarro decided to swing at two of those pitches. A lot of people mock Navarro's weight, his affinity for grounding into a double play, and even his defensive efforts. I try to avoid that, and I've said a few times I don't believe he's quite this poor of a player, but on this at-bat, he put forth no effort.

Really Dioner, you took ball one, that's a good start. You then swung at ball two and ball three and in the process had the worst at-bat of anyone in the majors this season. You aren't Pablo Sandoval or Vladimir Guerrero. You don't have that skillset and you don't have that job security. Having at-bats like these makes the decision to pursue another backstop all the easier.

I'm not sure if Navarro is really the worst player in baseball, but he gave those who believe it some strong anecdotal evidence tonight, and that's too bad.