I know Dan Wheeler was credited with the save today, but Grant Balfour was the real closer this afternoon. In the highest leverage situation of the game (3.00 pLI), Balfour was at his best. He entered the game in the 7th inning with the game hanging in the balance. The Rays were up 3-2 and the Jays had the bases loaded and just one out. Needing a strikeout or a pop up, Balfour got Kevin Millar to pop out to second before retiring Vernon Wells on a flyball for out number three.

On the afternoon he would throw 28 pitches in 1.2 innings. He had fantastic command today and 19 of those 28 pitches went for a strike. Balfour threw 25 fastballs at an average of nearly 93 mph. He also threw a slider and two pitches that were classified as curveballs. You can see them located at the bottom of this chart.

More after the jump 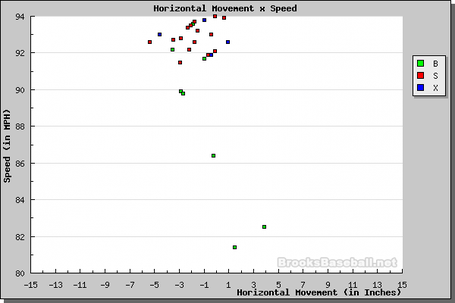 On the few occasions in which Balfour missed the strike zone, he missed in the right areas. The two curveballs missed low and he missed an inside fastball to a righty and one outside one to a lefty. The other three "balls" were within the normalized strike zone including the eighth pitch to Adam Lind that should've ended the at bat. You can see this pitch marked with the #8. 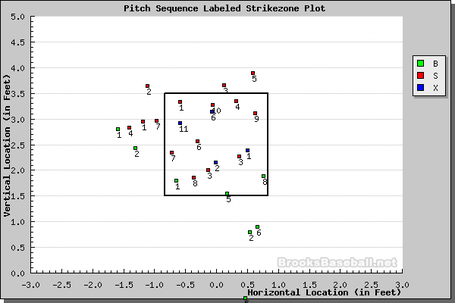 Even with last night's bump in the road, Balfour has been one of the keys to the bullpen's run of recent success. Along with J.P. Howell, Dan Wheeler and the rest of the gang, the Rays pen is once again a strength. Over his past 15.1 innings, Balfour has a K/9 of 9.53 while his walks have dropped to 1.78 per nine over the same time frame. A shinny 5.33 K/BB and no home runs give Balfour a FIP of under 1.5 during the last 30 days. Even though his velocity is down from 2008, Balfour is throwing near 93.5 mph now and he's throwing more sliders overall.

Many outsiders said the Rays would need to add a closer, but with Wheeler's improvement, the Iceman at the end of the game, and Balfour brining the heat, the Rays pen may be at its all time best. The bullpen played a key role in each of the Rays three one-run victories in the series. With the sweep of the Toronto, Tampa Bay has pushed the Jays 4.5 out of third place, 8.5 out of the wild card and 9.5 games back in the division.

That David Price kid may also work out too.