David Price had a no hitter through four innings. He had used just 47 pitches and was cruising. Unfortunately, basball games aren't four innings long and Price had to pitch in the fifth and sixth innings; that's when things went wrong. Over his final two frames, Price allowed six runs (five earned) on eight hits and used 50 pitches. To his credit he did not walk a batter once again and had four strikeouts. However, Price became all too predictable as the game went on and professional hitters are good at spotting that.

Working with Gregg Zaun for the first time, it looked like the plan was establish the fastball first. 44 of Price's first 47 pitches were some form of a fastball. Brooks Baseball classifies them as four-seamers, but there were definitely some two-seamers in there. 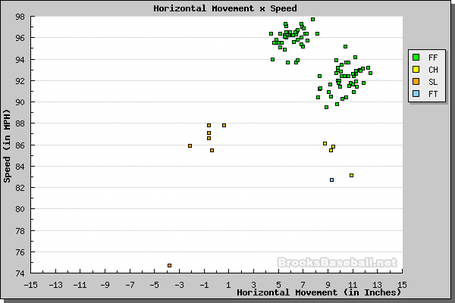 Nonetheless, it worked near pefectly the first time through the order. The only mark on Price's record was a HBP of Maicer Izturis. Unfortunately, Price and Zaun didn't flip the script the second and third time through the order and maintained a steady fastball diet. WIth two on and two out in the fifth, Price threw all fastballs to Reggie Willits despite working the count to two strikes. I was screaming at the TV for a slider; however, it never came. Willits lined a base hit off of another fastball and two runs scored. It was down hill from there

On the night he threw 97 pitches with 88.6% of them being fastballs. I know Price's fastball is good, but not that good especially against one of the better teams in MLB. Price's second best offering, the slider, was only thrown seven times (six really, one was a curve), and he threw only four change ups. Maybe he didn't have the feel for his slider last night, but obviously the heavy fastball diet didn't work after the Angels lineup flipped. This is where a real third offering comes in handy.

The good news is Price once again showed good control throwing nearly 70% of his pitches for strikes. He did not walk a batter for the second straight game and third time in four starts. After his July 4th start, Price has walked just five batters in his last 34 innings(six starts), However, he has given up 42 hits in those 34 innings. He's likely due for a slight BABIP regression since his BABIP for the period is in the mid .300s. I also want to note that Price's K/9 for this stretch has dipped below seven K's per nine.

The Rays went a combined 3-27 with two walks. The non Gregg Zaun and Evan Longoria players went 0-19. After looking like a shell of his former self for most of the season, Ervin Santana was back at least for last night. By the time the Rays started playing ball last night, they needed to win just to keep pace. After getting to within a 1.5 of the wildcard, the Rays are now 3.5 back. They are now 1-4 on this west coast with one to go. Baseball is funny like that; afterall, it was all good just a week ago.