Other than the earned runs and home runs James Shields out pitched Roy Hallday.  Take that, Roy!

Shields' first three innings were awful.  However, from the 4th inning on Shields allowed only one baserunner.  It's as if he was two totally different pitchers tonight.  If the Rays are going to get anywhere close to the Wild Card lead they're going to need the pitcher from innings 4-8 to show up a lot more.

-Every fanbase complains about the strike zone and how they're pitcher didn't get a call or is constantly getting squeezed.  On this site we've gotten on our collective soap box and cried the need for robot umpires, but tonight the humanoid umpire called a game a robot would be proud of.  Who was the umpire who called such a clean game?  Derryl 'Shoe Box' Cousins. 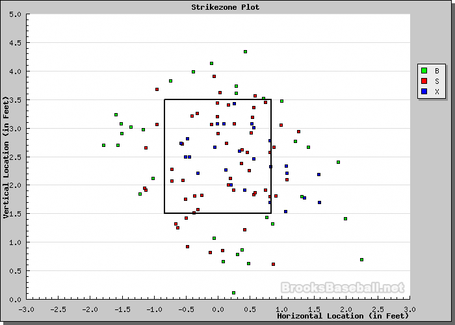 That's James Shields strikezone plot.  No green dots within the strikezone at all.  Can't say I've seen too many pitch f/x charts like that.  Roy Hallday's had a couple of low strikes that were not called, but I'm focusing on James Shields here.  But speaking of Hallday...

He apparently loves the left side of the plate, and he owned it last night  The Rays sent up six left handed batters last night and Halladay pounded them inside for most of it: 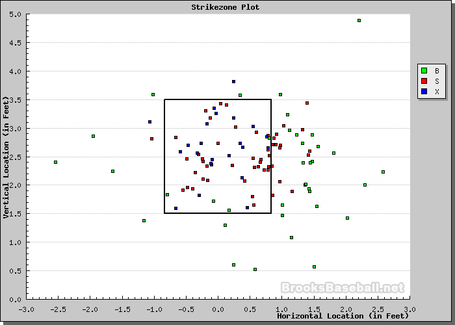 -The bright spot for the Rays last night was Carl Crawford.  He went 4-4 to raise his average to .318 for the season.  Crawford was only able to score once with those four chances, due to the Rays 3-4-5 hitters going 1-11, yet only striking out two times.  That's not quite going to cut it against a machine like Halladay.

-It's not too often that Carl Crawford and B.J. Upton get caught stealing in the same game.

-Congrats to Gregg Zaun for his first Zaun Bomb as a Ray.

-The losing needs to stop here.  They have dropped five games in a row, and the Wild Card is getting farther and farther away as each day passes.  Scott Kazmir needs to forget his start in Seattle and focus on the two strong outings he had last home stand.  Also, the Rays offense needs to treat Brian Tallet like he is Brian Tallet.