Infield Popped: Why Matt Garza's Infield Fly Rate is Down

Share All sharing options for: Infield Popped: Why Matt Garza's Infield Fly Rate is Down

Jim Hickey is a genius.

Andrew Friedman delivered him Matt Garza, a limitless arm with cooperation concerns, and Hickey turned him into a heater-throwing, infield-pop-inducing mad man. Garza nearly led the league in infield flies last year. As we all know, infield flies turn into outs more than any other batted ball type. Add in the lacking threat of a home run that normal fly balls bring and man, Garza's new skill was his best.  9 for every 50 fly balls became automatic outs. Talk about a beautiful habit.

Something went wrong this year. The ratio is down to 8 infielders per 100 fly balls. Clearly Hickey lost his ability to motivate Garza, or he decided automatic outs were no fun. Or, creating infield flies is simply an unrepeatable skill for most starting pitchers.

To test this radical theory I took every pitcher with 100+ innings over last and this year then ran the year-to-year correlation on infield fly balls. Here's the scatter plot to prove it: 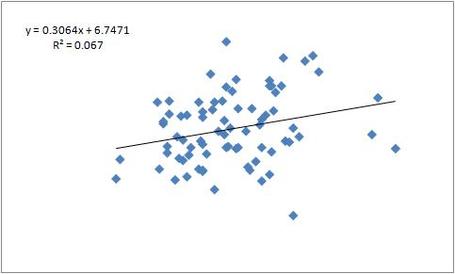 The R^2 is 0.067 and the p-value is 0.95. There's no relationship between year-to-year results. Which means this one isn't on Garza or Hickey. Generating infield fly balls simply aren't a repeatable skill. It's not like Garza can say "I'm going to throw this 95 mile per hour fastball and hope it gets hit in the air, but I want it to go further up than out." Well, he can say it, but it's like me saying I'm going to hit a 94 mile per hour fastball 500 feet the other way. Neither will brag about calling their shot afterwards though.

(Also worth noting: 77 samples were used.)