Share All sharing options for: B.J. Upton & Grady Sizemore Continue on the SimilarPath

After the 2007 season you would've been hard press to find two more desired players than B.J. Upton and Grady Sizemore. Upton, then 22/23, hit .300/.386/.508 with 24 home runs and 22 steals in129 games. Defensively, after playing the first half of the season at second base, he settled into a permanent home in centerfield and posted an above average 2.0 UZR in 78 games.

Meanwhile in Cleveland, Grady's ladies were just in heaven as the 25 year old Grady Sizemore was wrapping up his third full season. Sizemore put up excellent numbers to the tune of .277/.390/.462 and also belted 24 home runs like Upton. The best was yet to come as Sizemore would go 30-30 in 2008, while Upton regressed a bit thanks to a season long battle with a torn shoulder labrum.

Despite the two seemingly being destine for a decade plus of dominance after 2007, they are both having pretty bad seasons just two years later. 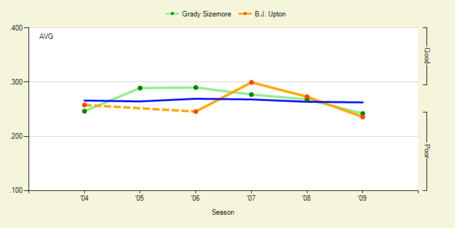 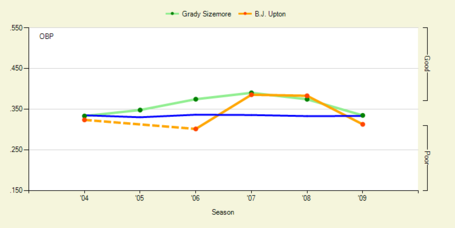 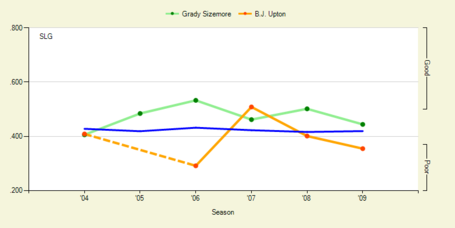 Upton's struggles have been well documented here. He's hitting just .236/.313/.355 the season. He suffered a demotion in the lineup, and only shows flashes of his 2007 self. Back in Cleveland, Sizemore was also temporarily removed from his lead off perch, but since has returned. Even after regaining his spot in the order, Grady is hitting just .242/.335/.444 on the year. Obviously, Sizemore's offensive drop off in power isn't any where near Upton's, but his game has taken a hit in other areas.

After swiping 38 bags in '08, Sizemore has just 11 steals in 19 chances this year. When Upton has gotten on base he still shows the ability to steal and is headed for a second straight 40 steal season. Defensively, Sizemore was regarded as one of the better center fielders in the game. In 2006, his UZR was 14.5 and he was awarded a gold glove in 2007 and 2008. This year Sizemore has actually hurt his team defensively and has a UZR of -0.4. Despite the better offensive numbers from Sizemore, Upton actually has a higher WAR than Sizemore (2.1 to 1.7) on the strength of his fantastic 11.8 UZR.

The good news is both players are still tremendously talented and still young enough to rebound.  I'm not going to preach regression in either case, but it's hard to believe that what we are seeing is what we're going to get from two players who have so much to offer. While we struggle to watch Upton everyday, we must remember that he isn't even 25 years old yet. Hopefully nights like last night become more of the norm for him as we head down the stretch because we're going to need all the help we can get.

*All numbers are from before Tuesday night's games