A Quick Look at the Rotation

Share All sharing options for: A Quick Look at the Rotation

I am going to shamelessly stealing this idea from Jeff over at LL but put a twist on it.

People worry a ton about where all these starting pitcher prospects will fit in. Some used it as reasoning to trade someone like Wade Davis or Jeremy Hellickson. So to see how quickly rotations can fall apart, I took each team's top six starters in 2007 and compared it to their 2009 top six to see how many of those '07 starters remained. Here are the results: 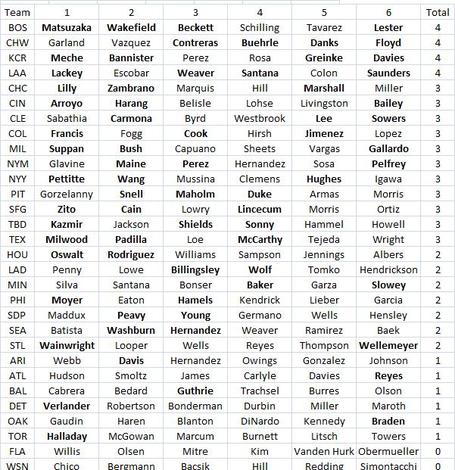 69/180 or 38%. Jeff found that 37% of top four outfielders were still on their current teams, so pitchers and outfielders basically have the same retention rate. Obviously I could go through and separate the ineffective pitchers from the injured, or the free agents from the traded, but that doesn't tell us anything additional.

What we do know is that four teams retained 4 of their top 6 starters two years later, two retained zero, a bunch have half of the arms, and the rest have two or one arm left. This is part injury prevention, part talent evaluation, and part plain luck. If this percentage holds true - and frankly I have zero idea if this is a high, low, or right on tap with the other years, but I doubt these things fluctuate too much - the Rays will likely have at least two new starters in 2011.

It's nice to talk about peak value with the arms in the system, but sometimes you have to keep a few in the cabinets even if it means diminishing any potential returns.

(I'll probably come back to this during the off-season, but if some other intrepid soul wants to compare 2004 to 2006 or 2005 to 2007, be my guest. I used B-Ref's team logs and sorted by games started to sort out the starter ranks.)